Farmers making sense out of a cartographic landscape: Like a patchwork of clothes, rather than just chunks of... parcels 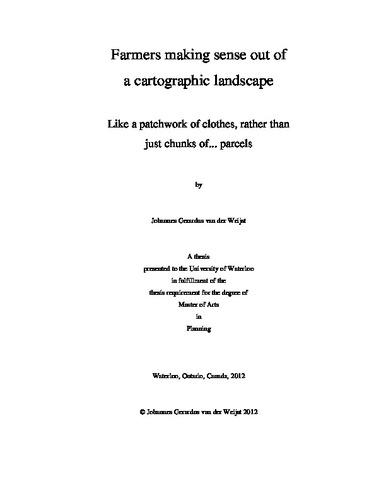 Planning maps are not only, as is often silently assumed by planners, neutral technical tools to assist them in their design and analytical tasks or to communicate their findings to others. In complex multi-stakeholder planning processes maps are also inherently coloured representations of knowledge, the outcomes a specific way of learning resulting from the activity of mapping itself, and discursive means through which norms and interests are promoted as objective truths. This thesis research explored how members of a local stakeholder group representing farm business made sense out of, and judged the data quality of planning maps in a combined highway planning and environmental impact study in southern Ontario, executed by the province’s Ministry of Transportation. More specifically it was concerned with how participants evaluated the cartographic representation issues of interest to them in the context of a mayor decision in the transportation study: the location of the highway route, in which both its existing route and new route sections through rural lands were options. The research instruments were a map review workshop and a questionnaire. This research was theoretically underpinned by a framework that integrates three fields of knowledge: cartographic theory, planning theory, and theory on knowledge and sensemaking. The framework served as a sensitizing concept for the analysis and interpretation of the observations obtained from research participants. All three fields were explored with an emphasis on social constructivist understandings which facilitated the understanding of situations characterized by complexity and ambiguity where certain and objective knowledge becomes impossible and where the perspectives and interests of multiple stakeholders come to the foreground. The spatial data on the study cartography in general was judged as correct. The big exception was the data on water-related phenomena. Here participants, although they were familiar with the area, had access to the reviewed cartography for more than two years, and were well aware of the importance of water-related issues in the decision-making process, only during the workshop became aware that the data, recently released by an official data source, were strongly outdated. The findings confirmed the usefulness for planning processes of the simple review procedure followed in the workshop. The process of sensemaking by participants focussed strongly on two areas. First, the central issue of the group: the recognition of agriculture as strong and relevant business deserving recognition equal to urban businesses. Second, on an issue that was not part of the goals of the study, the identification of needs for compensation, not only for loss of assets, but also for ongoing increases of operational costs. Participants, in contrast to the study’s thematically organized overlay analysis which resulted in a fragmented determination of impacts based on readily available public information, emphasized the need to use the farm (business) as a functional whole against which to measure impacts, considering its overall operation and viability. In the workshop it became clear that determining impacts on a complex entity like a farm is equally complex, and hard to map in a comprehensive way. Using maps not for a comprehensive analysis but for learning by illustration or example, however, offers opportunities in these cases. In practice this would require a review of what is considered as legitimate knowledge in formal decision-making. Participants attitudes towards (the representation of) nature showed to widely divergent, and attachment to place was virtually not touched upon. The emphasis on agribusiness seemed to stem not only from material interests, but was also strongly related to identity. Participants judged that the study cartography reflected a strong urban bias. They found that agriculture was underrepresented compared to urban economic and ecological interests and sometimes also misrepresented. Numerous suggestions were made to include new layers of data in the cartography, and to visually emphasize already included data related to agriculture. Although some information was found as redundant, is was above all the lack of more detailed information on agriculture and agribusiness that participants emphasized as issues they would like to see corrected. Whereas some data on some issues where emphasized as missing altogether, in other cases, notably in drainage, participants emphasized missing complementary perspectives. Information suggested by participants to be included mostly served to emphasize the importance of the agricultural sector as a whole and to spare it from impacts, but would create both technical and political difficulties if it were to be used for the comparison between different route options through rural lands. Different types of metaphors played an important role in the sensemaking process by the participants. Some participants followed more rational approaches to sensemaking that emphasized the correctness and information content of the data, while others seemed to be stronger ware of the strategic-discursive role of the maps. Many participants judged the study cartography as little explicit and highly ambiguous in many aspects, an observation for which a plausible explanation is the MTO’s needs to make decisions not only based on technical evaluations, but also taking into account strong informal political forces which required the study team to be able to review its positions if necessary and justify them largely based on the maps. Based on the research some recommendations for better public map use are suggested in order to make better use of the potential of cartography in planning to facilitate learning and mediation between multiple perspectives and interest. Future research, using anthropological methods, observing the process of creation and use of maps in planning in action is suggested as important to move beyond the limitations of perspectives that emphasize maps as representations.

Johannes van der Weijst (2012). Farmers making sense out of a cartographic landscape: Like a patchwork of clothes, rather than just chunks of... parcels. UWSpace. http://hdl.handle.net/10012/6568