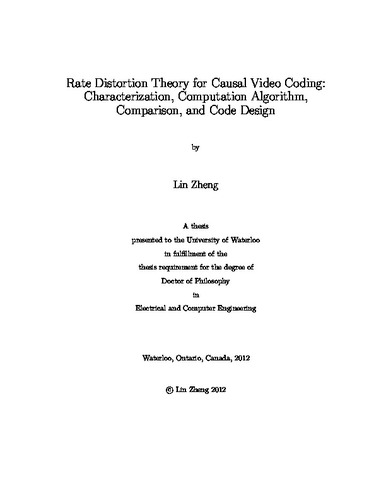 Due to the sheer volume of data involved, video coding is an important application of lossy source coding, and has received wide industrial interest and support as evidenced by the development and success of a series of video coding standards. All MPEG-series and H-series video coding standards proposed so far are based upon a video coding paradigm called predictive video coding, where video source frames Xᵢ,i=1,2,...,N, are encoded in a frame by frame manner, the encoder and decoder for each frame Xᵢ, i =1, 2, ..., N, enlist help only from all previous encoded frames Sj, j=1, 2, ..., i-1. In this thesis, we will look further beyond all existing and proposed video coding standards, and introduce a new coding paradigm called causal video coding, in which the encoder for each frame Xᵢ can use all previous original frames Xj, j=1, 2, ..., i-1, and all previous encoded frames Sj, while the corresponding decoder can use only all previous encoded frames. We consider all studies, comparisons, and designs on causal video coding from an information theoretic point of view. Let R*c(D₁,...,D_N) (R*p(D₁,...,D_N), respectively) denote the minimum total rate required to achieve a given distortion level D₁,...,D_N > 0 in causal video coding (predictive video coding, respectively). A novel computation approach is proposed to analytically characterize, numerically compute, and compare the minimum total rate of causal video coding R*c(D₁,...,D_N) required to achieve a given distortion (quality) level D₁,...,D_N > 0. Specifically, we first show that for jointly stationary and ergodic sources X₁, ..., X_N, R*c(D₁,...,D_N) is equal to the infimum of the n-th order total rate distortion function R_{c,n}(D₁,...,D_N) over all n, where R_{c,n}(D₁,...,D_N) itself is given by the minimum of an information quantity over a set of auxiliary random variables. We then present an iterative algorithm for computing R_{c,n}(D₁,...,D_N) and demonstrate the convergence of the algorithm to the global minimum. The global convergence of the algorithm further enables us to not only establish a single-letter characterization of R*c(D₁,...,D_N) in a novel way when the N sources are an independent and identically distributed (IID) vector source, but also demonstrate a somewhat surprising result (dubbed the more and less coding theorem)---under some conditions on source frames and distortion, the more frames need to be encoded and transmitted, the less amount of data after encoding has to be actually sent. With the help of the algorithm, it is also shown by example that R*c(D₁,...,D_N) is in general much smaller than the total rate offered by the traditional greedy coding method by which each frame is encoded in a local optimum manner based on all information available to the encoder of the frame. As a by-product, an extended Markov lemma is established for correlated ergodic sources. From an information theoretic point of view, it is interesting to compare causal video coding and predictive video coding, which all existing video coding standards proposed so far are based upon. In this thesis, by fixing N=3, we first derive a single-letter characterization of R*p(D₁,D₂,D₃) for an IID vector source (X₁,X₂,X₃) where X₁ and X₂ are independent, and then demonstrate the existence of such X₁,X₂,X₃ for which R*p(D₁,D₂,D₃)>R*c(D₁,D₂,D₃) under some conditions on source frames and distortion. This result makes causal video coding an attractive framework for future video coding systems and standards. The design of causal video coding is also considered in the thesis from an information theoretic perspective by modeling each frame as a stationary information source. We first put forth a concept called causal scalar quantization, and then propose an algorithm for designing optimum fixed-rate causal scalar quantizers for causal video coding to minimize the total distortion among all sources. Simulation results show that in comparison with fixed-rate predictive scalar quantization, fixed-rate causal scalar quantization offers as large as 16% quality improvement (distortion reduction).