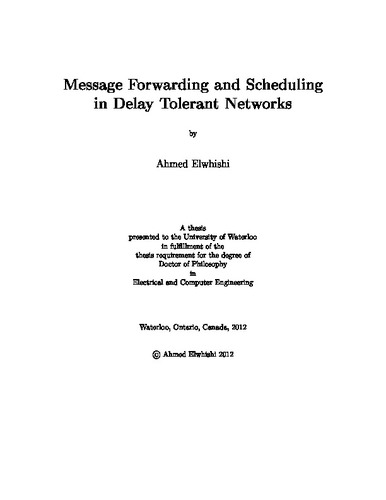 Delay-tolerant networking (DTN) has recently received considerable attention from the research community. This type of networks is characterized by frequent disconnections due to propagation phenomena, node mobility, and power outages. Thus, the complete path between the source and the destination may never have existed. This context requires the design of new communication paradigms and techniques that will make communication possible in these environments. To achieve message delivery, researchers have proposed the use of store-carry-and-forward protocols, whereby a node may store the message and carry it until an appropriate forwarding opportunity arises. Many flooding-routing schemes have been proposed for DTNs in order to increase the probability of message delivery. However, these schemes suffer from excessive energy consumption, severe contention that significantly degrades their performance, especially if we account for the fact that each node could be a hand-held and battery-powered device with stringent buffer size limitation. With such buffer limitations at the DTN nodes, message drop/loss could happen due to buffer overflow. In order to address the problem and improve the performance of DTNs, this thesis focuses on two main design objectives; first, the design and evaluation of new multi-copy routing schemes; second, the design and evaluation of new scheduling and dropping policies to reduce message drop/loss due to buffer overflow. To fulfill the first objective, a protocol called Self Adaptive Routing Protocol (SARP) is introduced. It is a multi-copy scheme designed to suit resource-sufficient DTNs. Based on SARP, two multi-copy routing schemes are further developed to suit resource-limited DTNs, in which compensating the traffic demand become a challenge: i) the Self Adaptive Utility-based Routing Protocol (SAURP), ii) and the Adaptive Reinforcement based Routing Protocol (ARBRP). The introduced protocols form a new framework of DTNs aiming to significantly reduce the resource requirements of flooding-based routing schemes. Each introduced scheme has its own way of exploring the possibility of taking mobile nodes as message carriers in order to increase the delivery ratio of the messages. In SAURP, the best carrier for a message characterized by jointly considering the inter-contact time that is obtained using a novel contact model and the network status, such as including wireless link condition and nodal buffer availability. In ARBRP, the routing problem is solved by manipulating a collaborative reinforcement learning technique, where a group of nodes can cooperate with each other to make a forwarding decision for the stored messages based on a cost function at each contact with another node. ARBRP is characterized by not only considering the contact time statistics, but also looks into the feedback on user behavior and network conditions, such as congestion and buffer occupancy sampled during each previous contact with any other node. The thesis argues and proves that the nodal movement and the predicted collocation with the message recipient can serve as meaningful information to achieve an intelligent message forwarding decision at each node. Therefore, the introduced protocols can achieve high efficiency via an adaptive and intelligent routing mechanism according to network conditions. To fulfill the second objective, we further enhanced the performance of DTN routing by introducing message scheduling and dropping policies such that the delivery ratio is increased and/or the delivery delay is reduced. This thesis investigates new buffer management and scheduling policies to improve the performance of flooding and utility-based forwarding routing in DTNs, such that the forwarding/dropping decision can be made at a node during each contact for either optimal message delivery ratio or message delivery delay. To examine their effectiveness, the introduced protocols and the buffer management and scheduling policies have been implemented and compared to a number of existing counterpart approaches. A near-realistic mobility model is used for testing. A number of scenarios are used to evaluate the performance of the introduced techniques in terms of delivery delay, ratio, and the number of transmissions performed.