Under Review: Source Use and Speech Representation in the Critical Review Essay 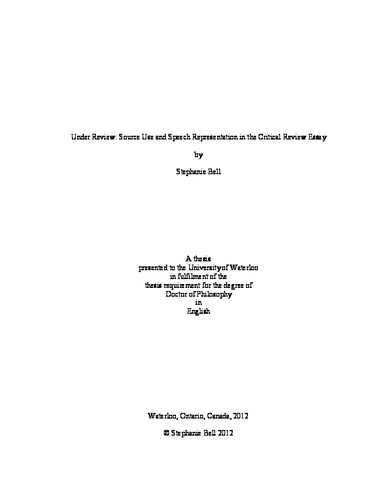 This thesis features a qualitative study of student source use and speech representation in two corpora of review essays that acknowledges the complexity of classroom writing contexts and the rhetorical nature of school genres. It asks how students engage with the texts they review, for what reasons, and in response to what aspects of the writing context. When considered as a distinct genre of student assignment, review essays make for a particularly interesting study of source engagement because they challenge students to maintain an authoritative voice as novices evaluating the work of an expert. In addition, citation issues in the review assignment might not be as obvious to students or their instructors as they would be, for instance, in a research paper for which multiple sources are consulted and synthesized. The review essays interrogated in this study were collected with appropriate ethics clearance from two undergraduate history courses. The analysis is extended to a small corpus of published reviews assigned as model texts in one of these courses. The study features a robust method that combined applied linguistics and discourse analysis to tease out connections between the grammatical structures of speech reports and their argumentative roles. This method involved a recursive process of classifying speech reports using Swales’ (1990) concepts of integral and non-integral citation, Thompson and Yiyun’s (1991) classifications of speech act verbs, and Vološinov (1929/1973) and Semino and Short’s (2004) models of speech reporting forms. In addition, the analysis considered the influence of the writing context on the students’ citation practices and took into account theories of rhetorical genre and student identity. The results show connections between assignment instructions and the effective and problematic ways students engaged with the texts they reviewed, such as a correlation between a directive to reduce redundancy and the absence of in-text attributions. Most notably, this study offers a fluid set of descriptors of the forms and functions of speech reports in student coursework that can be used by students, educators, plagiarism adjudicators, as well as scholars of rhetoric and composition, to illuminate some of the methods and motives of student source use.

Stephanie Bell (2012). Under Review: Source Use and Speech Representation in the Critical Review Essay. UWSpace. http://hdl.handle.net/10012/6554