The effect of in-stream wood on channel morphology and sediment deposition in headwater streams of the Oldman River Basin, Alberta 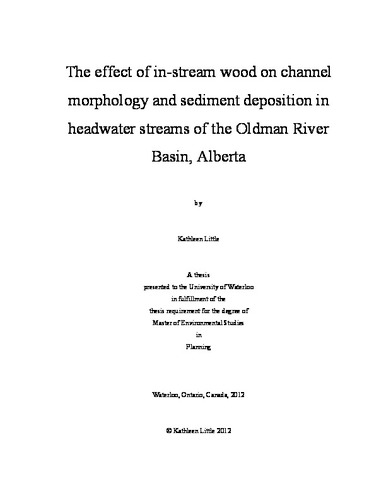 Headwater streams provide diverse habitat for aquatic organisms, drinking water for downstream communities and abundant recreational activities. The addition of in-stream wood to headwater channels can influence the hydrology, morphology and ecology of the system. The recruitment of wood to the channel and the export mechanisms determine the wood load and structure types formed in-stream, thus altering the channel’s morphological response. This research examined the effects of in stream wood on channel morphology in two headwater streams along the eastern slopes of the Canadian Rocky Mountains; Lyons East (LE) and Corolla Creek (CC). Lyons East has natural and anthropogenic disturbance (burned and salvage-logged) in the watershed, while Corolla Creek has anthropogenic (grazing and recreation) disturbances in the watershed. An assessment of the longitudinal spatial distribution and a reach-scale geomorphic classification were conducted to investigate the impacts of in-stream wood on channel morphology, pool formation and sediment storage. The spatial distribution of in-stream wood was 1.49 sites/100m for both watersheds, results that are comparable to previously conducted studies in similar geographic watersheds. The types of structures found in both watersheds were predominately jam formations (LE - 43%, CC - 47%), which is consistent with the wood loading and spatial distribution conceptual model previously developed by Whol and Jaeger (2009) for in-stream wood accumulations in mountain streams. At the reach-scale level of analysis, in-stream wood was found to impact channel morphology and pool forming processes. The addition of wood to the stream caused half of the studied reaches to have forced pool-riffle morphology. For all six selected study reaches, there was a decrease in expected pool spacing and an increase in the diversity of pool types. The relationship between wood-affected pools and sediment storage was examined and the results show that more sediment was stored in the burned/salvage logged reaches. Cohesive sediment was stored only in pools influenced by wood structures for half of the studied reaches. V* was generally higher in wood-affected pools for five of the six study reaches. The weighted average (V*w), which provides information regarding the storage of cohesive at the reach scale, was greater in Lyons East than in Corolla Creek. The presence of both exposed bedrock in the channel as well as the amount of vegetation are possible reasons for the smaller amounts of sediment observed in Corolla Creek. The observations from this reach scale investigation led to the development of a conceptual model, which can be used to predict the location of cohesive sediment storage in headwater streams of the Oldman River Basin. This model highlights the relationship between simultaneous recruitment of in-stream wood and sediment from local sources as a mechanism for protecting and storing cohesive sediment deposits. This research examined channel responses to in-stream wood within the context of land-use planning and Alberta’s Water for Life Strategy. There was evidence of lateral channel migration in the floodplain of both watersheds. At some sites, the channel shifted up to 30 metres while in other sections of the watershed, the channel was confined within a narrow valley. Accordingly, it is recommended that the current salvage logging guidelines be changed to include a flexible riparian buffer that would more appropriately reflect the diversity in riparian widths throughout the watersheds. In addition the best management practice is to allow natural in-stream wood processes to evolve and not to remove in-stream wood from the channel. The in-stream wood provides diverse aquatic habitat and the cycle of wood being recruited and being in the stream is part of the natural ecosystem in forested environments.