Energy Efficiency and Differentiated QoS in Next Generation PONs 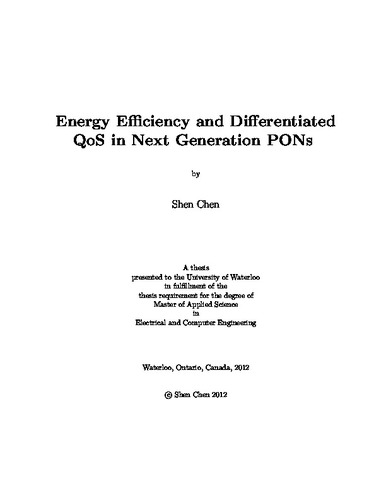 Energy conservation in next generation Passive Optical Network system (NG-PON) has gained more and more attention. NG-PON system can not only deliver best-effort data traffic, but also real-time data traffic, e.g. voice and video, that have strict bandwidth, delay, and jitter requirements. To meet the energy and service requirements, a NG-PON system must have energy efficiency and differentiated QoS mechanism built in. Few research efforts have been reported on maximizing energy efficiency while maintaining QoS in the fairly new PON system design. We have extended the Upstream Centric Scheme (UCS-based) scheduling scheme idea into a novel QoS-differentiated energy-efficient PON system consisting of two main modules: firstly, the proposed differentiated QoS analytical model is described in detail to reduce the packet delay in the upstream traffic scheduling. The simulations further demonstrate the QoS metrics of the system: packet delay, bandwidth utilization, dropped packet rate, and queue length. Secondly, a novel analysis is proposed for downstream traffic scheduling with limited service discipline at Optical Line Terminal (OLT) side under the UCS-based Green Bandwidth Allocation (GBA) framework. We, first, derive the mean packet delay expression of this model. Then, the sleep time for each Optical Network Unit (ONU) is derived by setting identical upstream/downstream transmission cycle time. Based on the analytical model, an approach is developed to save the maximum energy in a dynamic PON system while without violating the delay requirement. Moreover, simulation is conducted to verify the developed analytical model and the proposed approach. In the end, considering the differentiated QoS and downstream traffic scheduling, an algorithm of the energy efficient scheduling scheme is proposed as well under the UCS-based GBA.