Association of Intersex in Wild Fish with Wastewater Effluent in the Grand River, Ontario 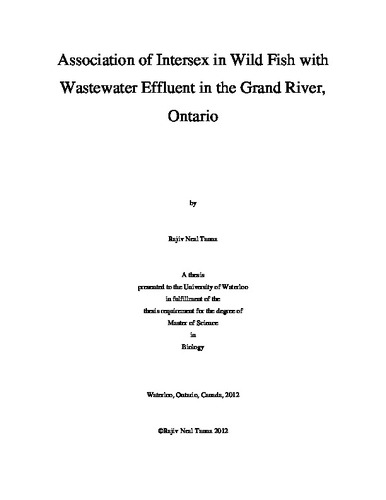 The Grand River watershed is the largest watershed in southern Ontario, and is expected to see major development and urban densification over the next 20 years. An expected 57% increase in population over the next two decades in urban centers such as Kitchener – Waterloo, Cambridge, Guelph and Brantford means an added load on the existing 30 wastewater treatment facilities serving the watershed. A subsequent increase in the amount of average flow and effluent released into the Grand River via the Waterloo and Kitchener wastewater treatment plants is also expected. The Waterloo and Kitchener wastewater plants are both secondary treatment plants, although neither plant currently nitrifies the wastewater prior to release. As a result, increased concentrations of ammonia and nitrate are found downstream of the treatment plant outfalls. Compounds introduced into the Grand River via the discharge of wastewater effluent can have impacts on resident biota such as fish. Disruption of the normal function of endocrine systems in fish has been associated with municipal effluents as well as chemicals that have been detected in these effluents. One of the major responses has been the presence of intersex (oocytes in testes) in fish downstream of the wastewater plant outfalls at sites around the globe. The research in this thesis examined resident fish for the variability and extent of intersex condition by adapting a new fragmented testis technique. Biomarkers of response such as relative gonad weight (GSI), relative liver weight (LSI) and condition (K) were also measured. The study focused on the Rainbow Darter (Etheostoma caeruleum) a dominant benthivorous fish species in the riffle habitats in the Grand River. An increased proportion of male Rainbow Darters sampled immediately downstream of the Waterloo outfall had a gonad lobe containing at least one testis-oocyte. The number of Rainbow Darter with more severe intersex (10-99 oocytes/lobe) also increased immediately downstream of the Waterloo outfall. A much more dramatic expression of intersex proportion and severity (>100 oocytes per testis lobe) was observed further downstream, below the Kitchener outfall. These patterns in intersex presence and severity were also observed in two other species collected at a subset of the original sites. Although there were minimal changes in GSI, LSI and K below the Waterloo outfall, differences were observed downstream of the Kitchener wastewater effluent outfall. Female Rainbow Darter downstream of the Kitchener outfall showed significant decreases in GSI and LSI, and increases in K. Male Rainbow Darter GSI and LSI data across sites did not express changes that coincided with MWWE outfalls, although small increases in condition were observed. These patterns of intersex and organism level responses suggest that the assimilation of wastewater effluent into natural receiving environments may have impacts on endocrine function and energy use and allocation in wild fish.