A BI-CULTURAL ANALYSIS OF NIGERIAN CANADIAN IMMIGRANTS WITH RESPECT TO ACCULTURATIVE STRESS, COPING, EGO INVOLVEMENT AND PARTICIPATION IN LEISURE 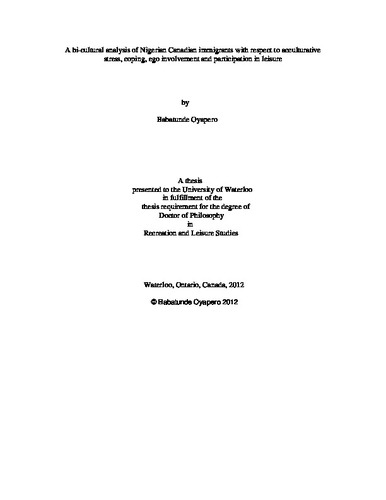 There have been few African studies that examined relationships between acculturation, a process where immigrants assimilate the culture of their host country, coping, acculturative stress and enduring involvement in leisure. The purpose of this study was to examine relationships between cultural orientations and acculturative stress, coping, leisure participation, as well as ego involvement of Nigerian Canadians in leisure. The research participants (n=104), were English speaking Nigerian Canadians between the ages of 18-52 average age of 35, SD of just under 8. All research participants were born outside Canada. Most Nigerian Canadians (99%, n=103) had lived in Canada for a period of 1-10 years when data were collected. Each participant filled out a questionnaire that measured their African and Canadian cultural orientations, and acculturative stress, coping, leisure participation, and ego involvement in leisure. Composite scale scores were computed for the variables of African cultural orientation, Canadian cultural orientation, depression, discrimination, intergenerational conflicts, coping and ego involvement in leisure; after which ANOVAs were computed to determine between group differences for the median split groups on these variables. Kruskal Wallis H tests were then computed to determine between group differences with regards to demographic characteristics, transportation, housing and dress patterns. ANOVA was also computed to determine differences on number of children in households. Pearson Correlations were then computed to determine relationships between leisure participation and ego involvement on one hand, and depression, discrimination, intergenerational conflicts, and coping on the other hand. Results revealed significant differences between participants on African and Canadian cultural orientations, with the two High African groups showing higher African preferences, and the two High Canadian groups showing higher Canadian preferences than the two lower African and the two lower Canadian groups in each instance. Participants were not significantly different on acculturative stress and coping. Also, there were minimal between group relationships with respect to leisure participation and acculturative stress and coping; while no relationships were found for ego involvement in leisure.