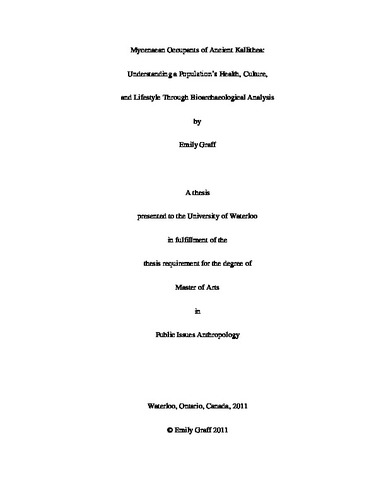 The Mycenaean cemetery at Kallithea Laganidia is the first comprehensive study of a cemetery sample from the periphery of the Mycenaean world. Previous studies have focused primarily on remains from palace centers. Even though it is known that the Mycenaeans populated Achaea , very little is known about this more rural population. Archaeologically and bioarchaeologically the region of Achaea has been neglected by formal and organized research, and as a result almost nothing is known about the population. This project has three aims. First, to provide new demographic data about sex, age, health, and the culture of these Mycenaeans. Secondly, via osteological analysis, to examine the hypothesis that the social stratification indicated by the associated grave goods in the tombs is reflected in the spatial orientation of each tomb and the health status of the individuals buried in the graves. Finally, to address the issue of “orphaned” archaeological collections, excavated in rescue operations, which then languish in storage for years or decades. The Kallithea Laganidia cemetery was in use from LHIIIA to LHIIIC and consists of one tholos and 23 chamber tombs. The tholos is a monumental high status tomb, and was in use both before and after the construction and use of the chamber tombs. Five of the chamber tombs were selected as a representative sample of the cemetery for this thesis. The tombs contained both men and women, and adults and children were represented among the tombs, indicating that they should provide a reasonable cross section of the population that buried their dead at Kallithea Laganidia. This osteological data showed and confirmed that the status differences seen in the grave goods from the tombs are also reflected in the tombs according to spatial distribution. The varying quality of burial offerings among the tombs of Kallithea Laganidia suggest that the tombs closer to the tholos contain burials of the socially elite, and the tombs farther away from the tholos contain burials of lower social classes. The pathology data collected, and more specifically the dental pathology data, do reflect social stratification among the sample’s five tombs, particularly when looking at antemortem tooth loss and severe dental wear. In addition, there are indications of status or behaviour differences between the sexes. Kallithean women seem to have been exposed to infection during life more often than men. Women have higher rates of infectious disease, and indications of more antemortem cranial trauma than men. Also, the presence of men, women, and children among secondary burials within these tombs suggested that there is a familial or linear tie within each tomb. The Kallithea Laganidia cemetery has the potential to yield new and informative data about the Achaean Mycenaean population. From this small sampling of 38 burials from five tombs, already the demography and paleopathology of this peripheral group is beginning to be deciphered.