the Creative Destruction of Hamilton: a Cultural approach to the Urban Regeneration of a City in Economic Transition 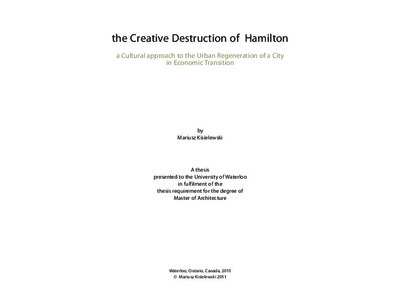 Charles Darwin proclaimed, “It is not the strongest of the species that survives, nor the most intelligent that survives. It is the one that is the most adaptable to change”. At the time, he probably did not fathom the relevance of his statement to the economy of cities. As the manufacturing sector dissipates, industrial cities strive to adapt by diversifying their local economy. This research provides a narrative of Hamilton’s industrial development and its transformation in search of a new identity. It examines the city’s economical, social and physical decay and its current urban regeneration that is based on the re-appropriation of its cultural landscape. This thesis argues that when cities focus only on the economic dimension of development, it may have an adverse influence on their inherent cultural identity which serves to undermine their ability to adapt and diversify. For Hamilton, a case in point is urban transformation of James Street North in a city that was recently subject to decades of neglect. James Street North has become the centre of a bourgeoning arts scene that is beginning to revitalize its neighbourhood. The thesis proposes the adaptive re-use of a deteriorated yet historically significant urban block within the area. The design intervention advocates an urban intensification intended to materialize a social and aesthetic identity derived from the urban agendas of Jane Jacobs, Charles Landry, and Sharon Zukin. The design synthesis proposes to establish a ‘creative milieu’ that becomes a catalyst for social cohesion, sustainable regeneration and an incubator for creativity. The design strategy consists of a hybrid building typology that is able to intensify diversity, exhibit creativity and engage dialogue among its occupants.

Mariusz Kisielewski (2012). the Creative Destruction of Hamilton: a Cultural approach to the Urban Regeneration of a City in Economic Transition. UWSpace. http://hdl.handle.net/10012/6537