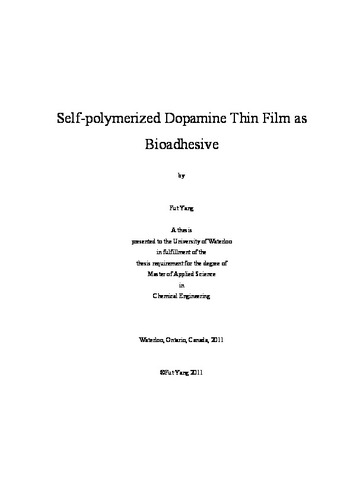 Dopamine is an interesting biomolecule that functions as a neurotransmitter in the brain. It has been found able to stick to almost all surfaces due to its unique catecholamine structure. Under alkaline conditions, the catechol functional group oxidizes to quinone allowing dopamine to self-polymerize and form thin films on support surfaces. The facts that dopamine can be coated to virtually any materials and the amine and catechol functional groups support a variety of reactions with organic species make polydopamine an attractive multifunctional bioadhesive/coating. To date, most of research on polydopamine has been focusing on its applications as thin films and little attention has been paid to the adhesion aspect of the material. In the study, we evaluated the properties of self-polymerized dopamine thin films as a bioadhesive. The thesis consists of three consecutive studies: (i) characterization of the adhesion properties of polydopamine thin films; (ii) investigation of the mechanical properties of polydopamine thin films; and (iii) exploration of the potential of polydopamine thin films as a wet adhesive. Fundamental insights on the wettability, adhesion behaviours, and mechanical properties of polydopamine thin films for both wet and dry conditions were derived through sets of well-designed contact angle, contact adhesion, and contact deformation experiments. It was found that dopamine is able to coat plastic, ceramic and metal surfaces, and join or bond rigid substrates but might not be suitable for joining soft or flexible parts as polydopamine is fairly rigid and the bonding might be too slow and too rigid for practical applications if polydopamine is directly used as an adhesive. Based on the understanding, a new strategy for fabricating underwater adhesive was proposed and tested. In the strategy, polydopamine with ferric ion as the oxidant was utilized as a cross-linker to alginate solution, effectively turning the solution into a wet adhesive, which demonstrated better practical performances than other studies; the adhesive was able to produce a permanent tensile adhesive strength of 80 kPa joining aluminum and glass with macroscopic roughness at the interface within 2 hours of curing time. Inspired by the results from the contact deformation experiments, we were able to extend the JKR theory with the well-known plate theory to accommodate the deformation of nanometer thin films, obtaining their elasticity. We termed this extended theory the “thin film contact mechanics” and validated the theory against gold thin films and found it predicted the mechanical behaviours of the thin films fairly well.