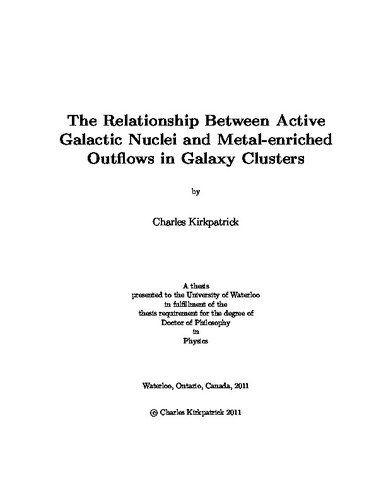 Clusters of galaxies are host to powerful Active Galactic Nuclei (AGN) that greatly affect the thermal history of clusters. By keeping X-ray emitting gas from cooling, massive, run away star formation does not occur in the brightest cluster galaxy (BCG). This is achieved through radio jets displacing large quantities of metal-rich gas and carving out cavities in the intracluster medium (ICM). This metal-rich gas was originally formed within the BCG and ejected through type Ia supernovae. The current distribution of the ejecta suggests an extra source of energy has spread the material far out into the ICM. Currently, it is unclear what mechanisms are responsible. In this thesis, I present evidence, in the form of X-ray imaging and spectra, that establishes a link between AGN and the observed distribution of metal-rich gas. First, the BCG in the Abell 1664 cluster is unusually blue and is forming stars at a rate of ~23 solar masses per year. The BCG is located within 5 kpc of the X-ray peak, where the cooling time of 3.5×10^8 yr and entropy of 10.4 keV cm^2 are consistent with other star-forming BCGs in cooling flow clusters. The cooling rate in this region is roughly consistent with the star formation rate, suggesting that the hot gas is condensing onto the BCG. We use the scaling relations of Birzan et al. (2008) to show that the AGN is underpowered compared to the central X-ray cooling luminosity by roughly a factor of three. We suggest that A1664 is experiencing rapid cooling and star formation during a low-state of an AGN feedback cycle that regulates the rates of cooling and star formation. Modeling the emission as a single temperature plasma, we find that the metallicity peaks 100 kpc from the X-ray center, resulting in a central metallicity dip. However, a multi-temperature cooling flow model improves the fit to the X-ray emission and is able to recover the expected, centrally-peaked metallicity profile. Next, using deep Chandra observations of the Hydra A galaxy cluster, we examine the metallicity structure near the central galaxy and along its powerful radio source. We show that the metallicity of the ICM is enhanced by up to 0.2 dex along the radio jets and lobes compared to the metallicity of the undisturbed gas. The enhancements extend from a radius of 20 kpc from the central galaxy to a distance of ~120 kpc. We estimate the total iron mass that has been transported out of the central galaxy to be between 2E7 and 7E7 solar masses which represents 10% - 30% of the iron mass within the central galaxy. The energy required to lift this gas is roughly 1% to 5% of the total energetic output of the AGN. Evidently, Hydra A’s powerful radio source is able to redistribute metal-enriched, low entropy gas throughout the core of the galaxy cluster. The short re-enrichment timescale < 1E9 yr implies that the metals lost from the central galaxy will be quickly replenished. Finally, we present an analysis of the spatial distribution of metal-rich gas in 29 galaxy clusters using deep observations from the Chandra X-ray Observatory. The BCGs have experienced recent active galactic nucleus activity in the forms of bright radio emission, cavities, and shock fronts embedded in the hot atmospheres. The heavy elements are distributed anisotropically and are aligned with the large-scale radio and cavity axes. They are apparently being transported from the halo of the BCG into the ICM along large-scale outflows driven by the radio jets. The radial ranges of the metal-enriched outflows are found to scale with jet power as R ~ P^0.43, with a scatter of only 0.42 dex. The heavy elements are transported beyond the extent of the inner cavities in all clusters, suggesting this is a long lasting effect sustained over multiple generations of outbursts. Black holes in BCGs will likely have difficulty ejecting metal enriched gas beyond 1 Mpc unless their masses substantially exceed 1E9 solar masses. It is likely however for these black holes to output enough energy to uplift all the peaked, metal-rich gas beyond the BCG to the currently observed widespread distribution.