Residential Solar Energy Adoption in a Community Context: Perceptions and Characteristics of Potential Adopters in a West Toronto Neighbourhood 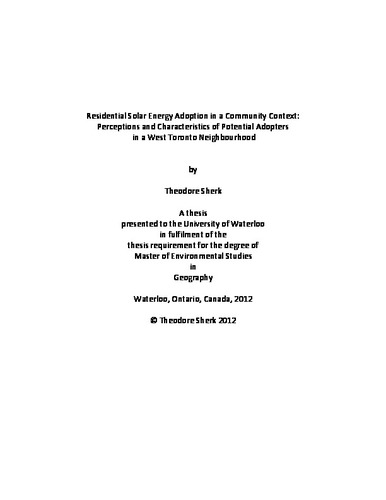 In the summer of 2007, a single neighbourhood in downtown Toronto contributed at least 13 percent of all residential grid‐tie solar photovoltaic (PV) systems sold in the Canadian province of Ontario. On average, PV purchaser households produced 37 percent as much electricity as they consumed. This research investigates solar energy adoption in a community case study. Specifically, it investigates why some residents who sign up for a solar resource assessment through a community solar energy initiative (CSEI) decide to purchase, and others decide not to purchase in the short‐term. Characteristics and perceptions of potential adopters are analyzed to better understand their motivations and barriers to adoption. Community energy projects became an official public policy goal in Ontario, with the passing of the Green Energy and Green Economy Act in 2009. Approximately 80 percent of Ontario’s anticipated generation capacity will need to be built, replaced or refurbished within 15 years. In this context, the Ontario Ministry of Energy, Ontario Power Authority, and Deloitte (one of Canada’s leading professional services firms), have partnered with a ‘green benefit’ fund, the Community Power Fund, to help local community groups access resources to develop and establish renewable energy projects. Understanding solar energy adoption in a community context is therefore important to improve the effectiveness of such policies, including the disbursement of multi‐million dollar grant funds. Differences between purchasers and non‐purchasers in respect of adoption behaviour were found in this study to cluster around two general themes. The first theme concerns differences in compatibility of both the concept of solar energy systems, and their physical attributes, with characteristics of potential adopter households. Some compatibility issues are straightforward, e.g. availability of roof space with a southern orientation. Others are more complex, involving several interrelated perceptual and socio‐demographic factors. For instance, while both purchasers and non‐purchasers rated cost as a very important barrier, purchasers rated the motivation of solar energy systems to reduce climate change higher relative to the barrier of high financial costs than did non‐purchasers. Purchasers were also more likely to possess a graduate degree, while non‐purchasers were more likely to hold a professional degree. The second general theme relates to potential adopters’ trust and stake in the ability of the community‐based initiative to reduce barriers in the adoption process. Since two types of solar energy systems are considered in the case study—PV and thermal (hot water)—differences are explored between each of three respondent groups: solar PV purchasers, solar hot water (SHW) purchasers, and non‐purchasers. iv Surveys were used to gather data on adopter perceptions and characteristics. A participatory research design helped identify the research topic. Two main bodies of literature—community‐based social marketing (CBSM) and diffusion of innovations theory—were drawn upon to conceptualize the adoption process and interpret the survey findings. These include five models of human behaviour that can be used to guide the design of CBSM campaigns. Diffusion theory was used as a basis for discussing ‘perceived innovation attributes’. The study takes an integrated approach by considering both social and technical aspects of solar energy adoption, together with the issues of fuel substitution and household electricity demand.