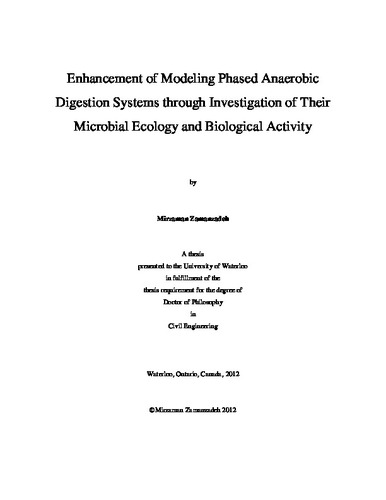 Anaerobic digestion (AD) is widely used in wastewater treatment plants for stabilisation of primary and waste activated sludges. Increasingly energy prices as well as stringent environmental and public health regulations ensure the ongoing popularity of anaerobic digestion. Reduction of volatile solids, methane production and pathogen reduction are the major objectives of anaerobic digestion. Phased anaerobic digestion is a promising technology that may allow improved volatile solids destruction and methane gas production. In AD models, microbially-mediated processes are described by functionally-grouped microorganisms. Ignoring the presence of functionally-different species in the separate phases may influence the output of AD modeling. The objective of this research was to thoroughly investigate the kinetics of hydrolysis, acetogenesis (i.e., propionate oxidation) and methanogenesis (i.e., acetoclastic) in phased anaerobic digestion systems. Using a denaturing gradient gel electrophoresis (DGGE) technique, bacterial and archaeal communities were compared to complement kinetics studies. Four phased digesters including Mesophilic-Mesophilic, Thermophilic-Mesophilic, Thermophilic-Thermophilic and Mesophilic-Thermophilic were employed to investigate the influence of phase separation and temperature on the microbial activity of the digestion systems. Two more digesters were used as control, one at mesophilic 35 0C (C1) and one at thermophilic 55 0C (C2) temperatures. The HRTs in the first-phase, second-phase and single-phase digesters were approximately 3.5, 14, and 17 days, respectively. All the digesters were fed a mixture of primary and secondary sludges. Following achievement of steady-state in the digesters, a series of batch experiments were conducted off-line to study the impact of the digester conditions on the kinetics of above-mentioned processes. A Monod-type equation was used to study the kinetics of acetoclastic methanogens and POB in the digesters, while a first-order model was used for the investigation of hydrolysis kinetics. Application of an elevated temperature (55 0C) in the first-phase was found to be effective in enhancing solubilisation of particulate organics. This improvement was more significant for nitrogen-containing material (28%) as compared to the PCOD removal (5%) when the M1 and T1 digesters were compared. Among all the configurations, the highest PCOD removal was achieved in the T1T2 system (pvalue<0.05). In contrast to the solubilisation efficiencies, the mesophilic digesters (C1, M1M2 and T1M3) outperformed the thermophilic digesters (C2, T1T2 and M1T3) in COD removal. The highest COD removal was obtained in the T1M3 digestion system, indicating a COD removal efficiency of 50.7±2.1%. The DGGE fingerprints from digesters demonstrated that digester parameters (i.e., phase separation and temperature) influenced the structure of the bacterial and archaeal communities. This resulted in distinct clustering of DGGE profiles from the 1st-phase digesters as compared to the 2nd-phase digesters and from the mesophilic digesters as compared to the thermophilic ones. Based on the bio-kinetic parameters estimated for the various digesters and analysis of the confidence regions of the kinetic sets (kmax and Ks), the batch experiment studies revealed that the kinetic characteristics of the acetoclastic methanogens and POB developed in the heavily loaded digesters (M1 and T1) were different from those species developed in the remaining mesophilic digesters (M2, M3 and C1). As with the results from the mesophilic digesters, a similar observation was made for the thermophilic digesters. The species of acetoclastic methanogens and POB within the T1 digester had greater kmax and Ks values in comparison to the values of the T3 and C2 digesters. However, the bio-kinetic parameters of the T2 digester showed a confidence region that overlapped with both the T1 and T3 digesters. The acetate and propionate concentrations in the digesters supported these results. The acetate and propionate concentrations in the M1 digesters were, respectively, 338±48 and 219±17 mgCOD/L, while those of the M2, M3 and C1 digesters were less than 60 mg/L as COD. The acetate and propionate concentrations were, respectively, 872±38 and 1220±66 in T1 digester, whereas their concentrations ranged 140-184 and 209-309 mg/L as COD in the T2, T3 and C2 digesters. In addition, the DGGE results displayed further evidence on the differing microbial community in the 1st- and 2nd-phase digesters. Two first-order hydrolysis models (single- and dual-pathway) were employed to study the hydrolysis process in the phased and single-stage digesters. The results demonstrated that the dual-pathway hydrolysis model better fit the particulate COD solubilisation as compared to the single-pathway model. The slowly (F0,s) and rapidly (F0,r) hydrolysable fractions of the raw sludge were 36% and 25%, respectively. A comparison of the estimated coefficients for the mesophilic digesters revealed that the hydrolysis coefficients (both Khyd,s and Khyd,r) of the M1 digester were greater than those of the M2 and M3 digesters. In the thermophilic digesters it was observed that the Khyd,r value of the T1 digester differed from those of the T2, T3 and C2 digesters; whereas, the hydrolysis rate of slowly hydrolysable matter (i.e., Khyd,s) did not differ significantly among these digesters. The influence of the facultative bacteria, that originated from the WAS fraction of the raw sludge, and/or the presence of hydrolytic biomass with different enzymatic systems may have contributed to the different hydrolysis rates in the M1 and T1 digesters from the corresponding mesophilic (i.e, M2 and M3) and thermophilic (i.e., T2 and T3) 2nd-phase digesters.