The Parametric Facade: Optimization in Architecture through a Synthesis of Design, Analysis and Fabrication 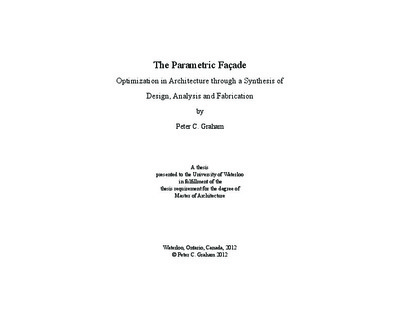 Modular building systems that use only prefabricated parts, sometimes known as building “kits”, first emerged in the 1830s and 1840s in the form of glass and iron roof systems for urban transportation and distribution centers and multi-storey facade systems. Kit systems are still used widely today in the form of curtain wall assemblies for office and condominium towers, yet in all this time the formal flexibility of these systems (their ability to form complex shapes) has not increased greatly. This is in large part due to the fact that the systems still rely on mass-produced components. This lack of flexibility limits the degree to which these systems can be customized for particular contexts and optimized for such things as daylighting or energy efficiency. Digital design and fabrication tools now allow us to create highly flexible building facade systems that can be customized for different contexts as well as optimized for particular performance objectives. This thesis develops a prototype for a flexible facade system using parametric modeling tools. The first part of the thesis looks at how parametric modeling can be used to facilitate building customization and optimization by integrating the acts of design, analysis, fabrication and construction. The second part of the thesis presents the facade system prototype and documents key aspects of its development. The facade system is modeled in Grasshopper 3D, a parametric modeling plug-in for Rhinoceros 3D. The model has built-in analysis tools to help the user optimize the facade for daylighting, energy efficiency, or views within any given context, as well as tools that alert the designer when fabrication or construction constraints are being violated.

Peter C. Graham (2012). The Parametric Facade: Optimization in Architecture through a Synthesis of Design, Analysis and Fabrication. UWSpace. http://hdl.handle.net/10012/6524