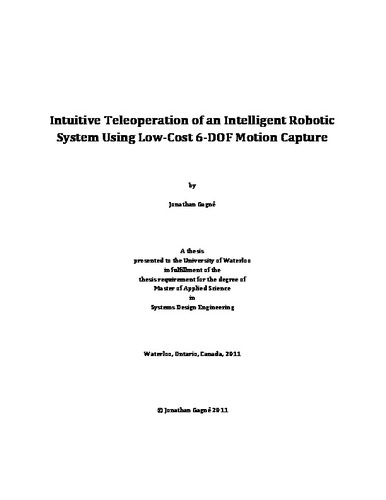 There is currently a wide variety of six degree-of-freedom (6-DOF) motion capture technologies available. However, these systems tend to be very expensive and thus cost prohibitive. A software system was developed to provide 6-DOF motion capture using the Nintendo Wii remote’s (wiimote) sensors, an infrared beacon, and a novel hierarchical linear-quaternion Kalman filter. The software is made freely available, and the hardware costs less than one hundred dollars. Using this motion capture software, a robotic control system was developed to teleoperate a 6-DOF robotic manipulator via the operator’s natural hand movements. The teleoperation system requires calibration of the wiimote’s infrared cameras to obtain an estimate of the wiimote’s 6-DOF pose. However, since the raw images from the wiimote’s infrared camera are not available, a novel camera-calibration method was developed to obtain the camera’s intrinsic parameters, which are used to obtain a low-accuracy estimate of the 6-DOF pose. By fusing the low-accuracy estimate of 6-DOF pose with accelerometer and gyroscope measurements, an accurate estimation of 6-DOF pose is obtained for teleoperation. Preliminary testing suggests that the motion capture system has an accuracy of less than a millimetre in position and less than one degree in attitude. Furthermore, whole-system tests demonstrate that the teleoperation system is capable of controlling the end effector of a robotic manipulator to match the pose of the wiimote. Since this system can provide 6-DOF motion capture at a fraction of the cost of traditional methods, it has wide applicability in the field of robotics and as a 6-DOF human input device to control 3D virtual computer environments.