The Long Reach of War: Canadian Records Management and the Public Archives 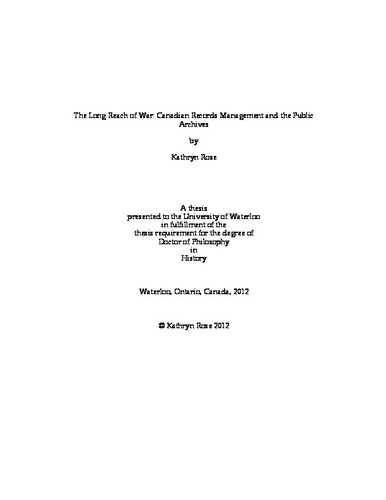 This thesis explores why the Public Archives of Canada, which was established in 1872, did not have the full authority or capability to collect the government records of Canada until 1966. The Archives started as an institution focused on collecting historical records, and for decades was largely indifferent to protecting government records. Royal Commissions, particularly those that reported in 1914 and 1962 played a central role in identifying the problems of records management within the growing Canadian civil service. Changing notions of archival theory were also important, as was the influence of professional academics, particularly those historians mandated to write official wartime histories of various federal departments. This thesis argues that the Second World War and the Cold War finally motivated politicians and bureaucrats to address records concerns that senior government officials had first identified during the time of Sir Wilfrid Laurier.