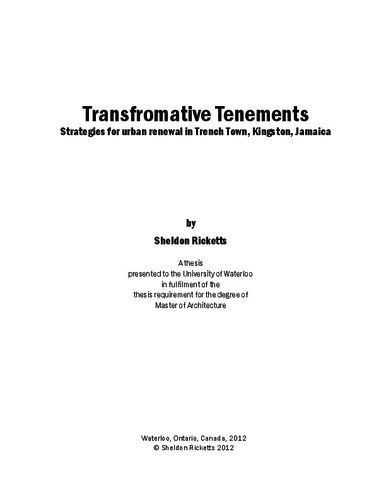 The hardened inner city community of trench town represents one of several impoverished communities that form the heart of the Jamaican capital city, Kingston. As wealth and influence have moved inland, off the coastal plains on which the city was originally settled on, to the slopes of the surrounding mountains, the once vibrant downtown core has decayed. With this urban decay came the social ills that usually accompany failing communities such as crime, violence, shadow economies, health and sanitation issues. As has been the case with many urban centres worldwide, this problem was further exacerbated by an ever present influx of rural immigrants in search of a better life in the city. These associated urban problems not only affect the inhabitants of these communities, but they stifle the growth of the larger national economy. This thesis aims to explore and propose urban design interventions to the inner city community of Trench Town, that not only address the issues of providing viable shelter to the residents of the community, but also begin to set up a frame work of self reliance and economic sustainability and growth, so that the community members can begin to develop their lives for themselves. It also begins to look at ideas of communal living that have been experimented with at on a small scale over the years, but have never been fully integrated into the urban fabric. This thesis looks to examine one specific community within the urban fabric of the city, but all the while cognisant of the fact that this one community is but one in the overall urban fabric, yet recognising that as each informal inner-city community has developed out of a unique set of conditions and thus must be treated individually as such. Throughout the years, several interventions have been implemented to address the overall need to house the population of the expanding urban centres, with many variations of urban housing solutions being used, with varying degrees of success. This thesis will explore the implications of these solutions on the proposed site, and explore viable modifications and variations. Firstl an in depth exploration into the historical and cultural context of the case site will be explored to gain important background knowledge of known factors of spatial development and community needs, and this will form the foundation of any further development going ahead in the case study, which will provide the analytical breakdown of the site and influences. The thesis will then explore international case studies of various approaches to similar situations to identify challenges that have been experienced elsewhere and that may inform the design site. From this research information, parameters and principles will be distilled to inform the overall design intervention. Finally, the proposed design intervention will be reflected upon, and evaluated to try to determine any shortcomings and indentify how the design might be replicated in other communties in Kingston facing similar social and economic conditions.