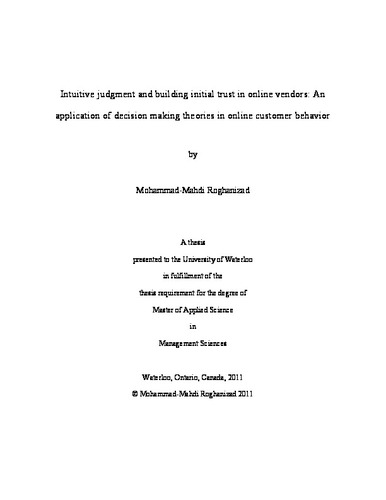 The importance of trust in Electronic Commerce (EC) has been addressed for about two decades and various theories have been applied to investigate the issue. In spite of a consensus among researchers of trust in a website being a risky decision, they have neither applied decision making theories (e.g. two systems of reasoning) in the context nor created a risky situation when examining their hypotheses about trust in EC. Instead, the decision is implicitly assumed to be deliberative although not enough evidences have been collected to support the assumption. An in-lab experiment was conducted to investigate the above shortcomings in the literature. Findings show that unlike the current belief, intuition (and not deliberation), is the dominant decision making process when trusting an unknown website in a risky situation. The level of trust is significantly different when risk is not involved. In addition, one of the well-established constructs, “situational decision making to trust”, was not confirmed by the collected data in the risky situation. The results conflict with EC and trust literature and clarify the crucial role of risk in decision making to trust. Hence, the studies that have measured and validated trust and related constructs without the actual risky situation might need to be reconsidered.