Type 2 diabetes mellitus and the prevalence of age-related cataract in a clinic population. 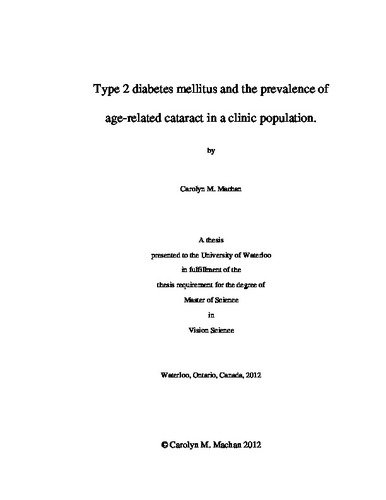 Purpose: The prevalence of diabetes (DM) is increasing globally with type 2 diabetes (T2DM) being primarily responsible for this alarming trend. Age and DM have been associated with an increased prevalence of AR cataract in earlier studies but T2DM has not been considered separately from type 1 diabetes. Furthermore, study results have been inconsistent in terms of whether nuclear sclerosis (NS), cortical cataract (CC) or posterior subcapsular (PSC) are specifically associated with DM. The purpose of this thesis was to provide Canadian data on these issues while considering the limitations found in earlier studies in terms of variable age group selection and cataract definition. Logistic regression analysis was extended beyond risk analysis to model the prevalence of AR cataract across the human age range. Finally, as statins are commonly prescribed for patients with T2DM, the impact of using this pharmaceutical on AR cataract prevalence was investigated. Methods: A file review of over 6397 clinic files was performed to create the Waterloo Eye Study (WatES) database. Abstracted data included patient age and sex, the presence of early to late AR cataract (NS, CC, PSC or related lens extraction-LE), systemic health diagnoses including a diagnosis of T2DM or type 1 diabetes, and any medication used. Data quality was looked at through repeatability with double-entry of files and calculation of missing data rates. Comparisons were done between the study population demographics (age and sex) and those available on the general population and representative Canadian optometric patients. Prevalence of AR cataract was determined for the entire study group and for yearly age-groups. The probability of AR cataract generated from logistic regression analysis was used to model the prevalence of AR cataract over the entire age range of patients. Similar functions were determined for T2DM and non-diabetic (ND) subgroups and then again after further subdividing them into patients who did and did not use statins. The age of 50% prevalence of AR cataract were determined for each of these functions. Distribution rates of mixed and uniform cataract were calculated and compared for the T2DM and ND subgroups. Age of first lens extraction and differences in LE rates were also determined for these groups. Multivariable logistic regression analysis was done to determine odds ratios (OR) for associations between variables (patient age, being female, having a diagnosis of T2DM, smoking, systemic hypertension, and statin use) and the outcome of AR cataracts or its subtypes. Results: Data abstraction repeatability was found to be high and missing data rates were found to be low. While significant differences existed between the demographics of the general population and this clinic population, the sex and age distributions were comparable to optometric practices in Canada. The overall prevalence of AR cataract, NS, CC,and PSC in this population was 35.3%, 28.8%, 9.9%, and 3.6% respectively. The yearly prevalence of AR cataract in this population was found to increase in a sigmoid trend over the course of the human age span that began to rise after 38 years of age and approached 100% by 75 years of age. When modelled into a probability of cataract function, 50% prevalence of AR cataract occurred at 56.6 years of age. T2DM was reported in 452 WatES patients; 97% of whom were over 38 years of age. The probability of 50% AR cataract, NS, and CC prevalence occurred almost four years earlier in the T2DM subgroup compared to those without diabetes. PSC was much less prevalent and did not reach 50% levels, but the age of 10% prevalence was eight year earlier in the T2DM group compared to the ND group. Patients with T2DM had more mixed cataract, a higher rate of LE and an earlier age of first LE than non-diabetics. Statin use was reported in 761 patients; 96% who were over 38 years of age. Statin use was 3.5 times more common in patients with T2DM compared to non-diabetics. When the diabetic subgroups were further subdivided by those who do and do not use statins, the age of 50% probability of AR cataracts was now almost eight years earlier in the T2DM patients using statins compared to the ND patients who did not. The probability functions were similar between T2DM patients not using statins and ND patients who did report statin use. Having a diagnosis of T2DM was significantly associated with early to late NS and CC when controlling for statin use, whereas statin use was significantly associated with NS and PSC when controlling for a diagnosis of T2DM. Conclusions: AR cataract, T2DM and statin use were prevalent conditions in this clinic population, especially over 38 years of age. Modelling the prevalence of AR cataract over a broad age range could assist predicting cataract in Canadian optometric patients. A diagnosis of T2DM resulted in an earlier development of all three cataract subtypes, resulting in increased rates of LE and mixed cataract. However, the association was only significant for NS and CC when controlling for statin use. Given the frequent use of statins in patients with T2DM, the significant association found between statin use and increased risk of AR cataract warrants further study.