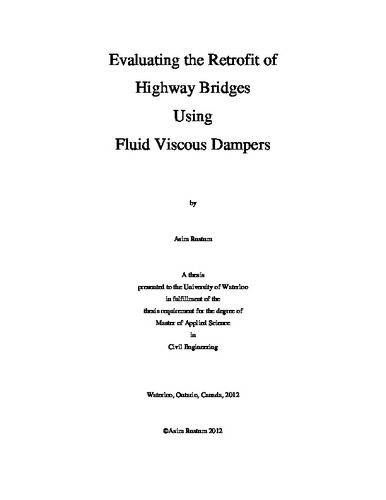 Highway bridges function as the arteries of our society. Hence, it is essential that they remain operational following an earthquake. Unfortunately, a significant number of bridges worldwide, including in Canada, were constructed prior to the development of modern seismic design provisions. In many cases, such bridges are expected to perform poorly during earthquakes. According to a report published in 2000 by Ministry of Transportation of Ontario (MTO), in eastern Ontario alone, there are over 70 bridges that are structurally deficient. Current methods to retrofit these bridges to bring them into compliance with the existing codes would entail substantial structural modifications. Examples of such modifications include the replacement of existing rocker bearings with elastomeric bearings, structural strengthening of piers, and enlarging the bearing surfaces. These methods involve substantial cost, effort, and materials. An alternative means to retrofit structurally deficient bridges is investigated in this thesis. This method involves using a combination of elastomeric bearings and fluid dampers to retrofit highway bridges. In principle, these devices work in the same way as shock absorbers in automobiles. They absorb shock and dissipate the vibration energy to the environment as heat. In the case of bridges, earthquakes impart the shock to the structure. Before these devices can be implemented in practice, there are many issues that need to be understood with respect to their performance and modelling. Moreover, a comparative assessment between popular retrofit options employing isolation systems needs to be undertaken to verify and provide a benchmark to assess their performance. The Mississippi River Bridge near Ottawa is chosen as a test structure to conduct this study. This bridge already contains an advanced isolation system, and has an extensive documentation available for modelling and verification. Various retrofit options will be studied and compared with the existing isolation design for this bridge. In all cases, the effect of soil-structure interaction is included. A comprehensive set of performance indices are used to evaluate the performance of various retrofit options. All the models are constructed in the open source software, OpenSees. The research demonstrates that the proposed approach is a viable retrofit method for highway bridges. Moreover, compared to advanced isolation systems, retrofit using elastomeric bearings with viscous dampers was successful on transferring lower loads to the substructure, and resulted in lower superstructure displacements. Though this study involved one bridge, it has provided a computational test bed to perform further studies and has provided valuable insight into the modeling and performance of retrofit solutions.