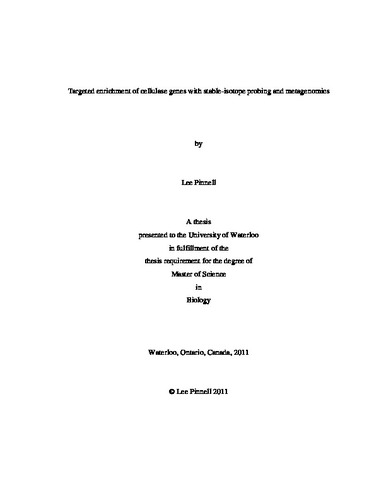 Cellulose is the most abundant organic compound on the planet, and is found in nearly every ecosystem. Cellulose is also the most abundant waste product produced by human activity. These enormous stores of natural cellulose and cellulose-containing wastes are a potential renewable energy source. The hydrolysis of cellulose is referred to as cellulolysis and is carried out by cellulase enzymes, which are members of certain glycoside hydrolase families. For most of its history, the microbiology of organisms like those that hydrolyze cellulose was based solely on the testing of physiological and biochemical behaviour of isolated organisms in pure cultures. Despite having gained an important foundation of knowledge in the characterization of microorganisms, cultivation-based techniques introduce major bias into understanding the role that specific microorganisms play because the majority of microorganisms are not readily cultured. Two of the most powerful culture-independent approaches for accessing microbial communities are DNA stable-isotope probing (DNA-SIP) and metagenomics. Though each methodology has been used on its own, it is a combination of these two approaches that has enormous potential to generate results for industrial applications and to help characterize biogeochemical cycling. This thesis presents the first research combining DNA-SIP and metagenomics using cellulose, and the first to target glycoside hydrolase genes from Arctic tundra. For this research, two-month DNA-SIP incubations were carried out with 200 mg of 13C-labelled cellulose as a substrate. Denaturing gradient gel electrophoresis (DGGE) provided evidence indicating the successful enrichment of microorganisms able to metabolize cellulose. Multiple displacement amplification (MDA) was applied to both the bulk-soil samples and DNA-SIP samples. Following MDA, all DNA samples were subjected to Illumina sequencing, including DNA from a cellulose-degrading enrichment. Functional annotation for each Illumina library was done using the SwissProt database within MG-RAST. The DNA-SIP enrichment resulted in a ~3 fold increase in the relative abundance of glycoside hydrolases and cellulase enzymes in relation to bulk soil samples. A cellulose degrading enrichment contained the highest relative abundance of glycoside hydrolases and cellulase enzymes, with a five fold increase relative to the DNA-SIP enrichment. The enrichment culture had a much lower relative diversity, which was measured using the Shannon Index. An unrooted neighbor-joining tree constructed using Bray-Curtis similarity coefficients for each sample demonstrated that as a result of a considerably higher proportion of cellulase gene sequences and a lower diversity the enrichment culture was the most distinct library, with the DNA-SIP library most closely related to it. DGGE provided initial evidence that MDA introduced bias into the amplification of DNA from the DNA-SIP sample. This was confirmed following sequencing and annotation as the proportion of glycoside hydrolase enzymes sequences decreased 67% following MDA of DNA-SIP enriched DNA and the mean G+ C content of libraries decreased. This research provides evidence indicating that DNA-SIP enrichment prior to the construction of metagenomic libraries increases the abundance of targeted gene sequences, which should enable greater access to functional genes of active microorganisms for potential industrial applications.