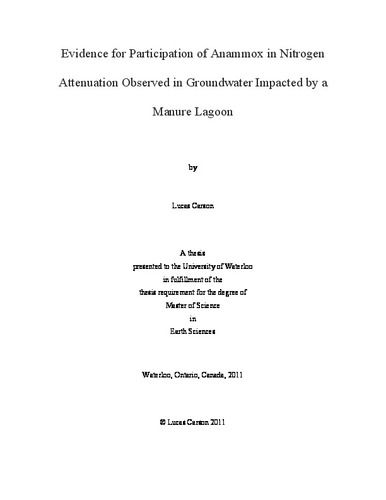 Decades of agricultural use of fertilizer and manure has resulted in nitrogen being the most common groundwater contaminant. Of the known processes for nitrogen attenuation, both denitrification and anammox produce a complete transformation of nitrogen species to dinitrogen gas (N2); however, denitrification is typically also associated with the release of N2O and CO2, both greenhouse gases. Anaerobic ammonium oxidation (Anammox), which has been recently discovered to be more prevalent in groundwater environments than previously thought, simultaneously removes NH4+ and nitrate (NO3-), does not require dissolved organic carbon (DOC), and does not produce greenhouse gas by-products. This study evaluates the natural occurrence of anammox in a manure lagoon plume, as well as the feasibility of enhancing anammox activity by mixing NH4+ rich groundwaters and NO3- rich groundwaters together. Fifteen experiments were undertaken with NH4+-N concentrations ranging between 5-100 mg/L, and a NO3--N ranging from 5-88 mg/L. These experiments suggest a nitrogen removal rate (based on NH4 + removal in anaerobic conditions) from anammox generally in the range of 0.1-0.2 mg/L/day. Based on an absence of dissolved oxygen (DO), and concomitant loss of NO3--N with associated 15N-NO3- enrichment (2.1-8.7‰ ) in 11 experiments, it is considered unlikely that nitrification was the cause of the NH4+ loss observed in these experiments. Concurrent 15NNH4+ enrichment of 4.1-11.5‰ was observed in these 11 experiments. Real-time quantitative polymerase chain reaction (qPCR) DNA analyses were used to show the presence of anammox bacteria and to demonstrate temporal population increases during the experiments (up to 16.3% anammox in total bacteria population) in the three experiments analyzed. Although anammoxrelated N removal rates were modest in these trials, such rates could be significant with respect to the multi-year residence times associated with most groundwater flow systems.