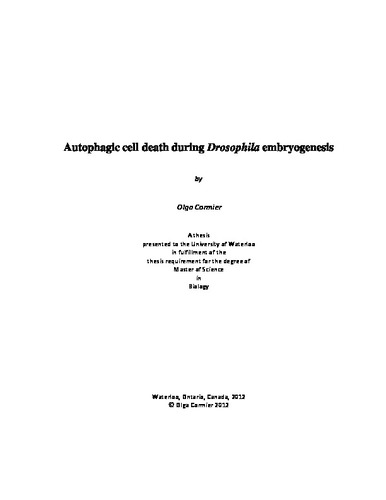 The amnioserosa (AS) is an extraembryonic tissue that undergoes programmed cell death (PCD) during the normal course of Drosophila embryogenesis. AS degeneration involves morphological evidence of autophagy as well as caspase activation, but the relationship between these two processes is not well defined. While the bulk of the AS tissue dies at the conclusion of the morphogenetic process of dorsal closure (DC), approximately 10% of AS cells are actively extruded from the epithelium during DC. Using live imaging confocal microscopy and various fluorescent protein sensors, I have been able to observe caspase activation as well as autophagy upregulation in the context of epithelial extrusion events as well as overall AS degeneration. The data show that epithelial extrusion events are caspase-dependent but are also associated with localized onset of autophagy. Furthermore, extensive characterization of loss of function mutants of the key Drosophila regulator Atg1 kinase indicates that autophagy is not required for the normal degeneration of AS, contrary to earlier studies. This thesis also introduces new relationships between caspase activation and autophagic cell death. In addition, new data suggest that the InR/TOR and EGFR/Ras/MAPK signaling pathways interact with the pro-apoptotic protein Head involution defective (Hid) and Atg1 kinase to regulate the progression of programmed cell death in the AS.