Quantifying the Groundwater Component within the Water Balance of a Large Lake in a Glaciated Watershed: Lake Pyhäjärvi, SW Finland 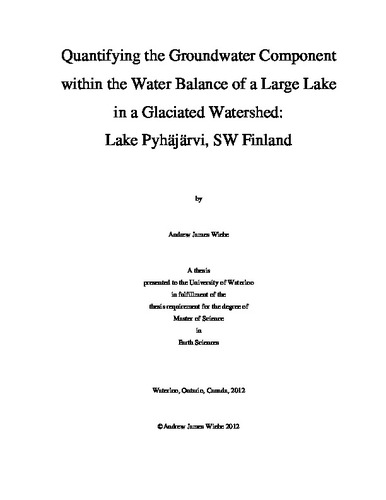 Accurate estimates of the amount of groundwater entering a lake on a yearly basis may provide valuable information for assessing contaminant loadings such as nutrient mass fluxes and the subsequent contribution of groundwater to eutrophication. Groundwater exchange with lakes is often a critical component of a lake’s water balance, yet its quantification has often proven problematic. Large component uncertainties preclude accurate estimation of the groundwater flux, upon which the assessment of contaminant loadings may depend. In this study, water balance techniques for lake systems were assessed at Lake Pyhäjärvi (near Säkylä, SW Finland), a relatively large lake in a long established agricultural area. A water balance was conducted over 38 water years to estimate the net groundwater discharge into the lake. This was compared with groundwater flux estimates via Darcy’s Law for the adjacent Honkala Aquifer in the Kuivalahti-Säkylä tributary esker (a potential conduit for groundwater impacted by agricultural practices). Direct runoff estimates were initially made using an average of river flow per unit area ratios from the two rivers that flow into the lake. Adjustments to these estimates were made using PART (Rutledge, 2007) hydrograph separation results from the larger river. The mean net groundwater discharge increased from -73 to +38mm per unit lake area (-4.8 to +2.5% of average total inflow) due to these adjustments, which yielded a better qualitative match with observations at the lake (e.g., Rautio, 2009; Rautio and Korkka-Niemi, 2011). Uncertainty analysis for the water balance indicated that relative uncertainty ranged from 40 to 2900% on the net groundwater flux, while the average absolute uncertainty was 118mm per unit lake area. Groundwater discharge estimates based on Darcy’s Law were ≤ 22 mm per unit lake area (≤1.4% of average total inflow) with sizeable uncertainty (± one order of magnitude). Most of the uncertainty on the net groundwater discharge estimates was incurred from the evaporation, precipitation, and direct runoff components; esker flux uncertainty was essentially due to error on the hydraulic conductivity estimate. The resolution of the water balance method suggests that it is better suited to lakes with relatively large net groundwater contributions (>5% of average total inflow). Results highlight the following needs for large lake water balances: improvements in the accuracy of evaporation, precipitation, and direct runoff component estimates; and uncertainty analysis. Groundwater contributions to inflow rivers may be more important than direct discharge from highly permeable subsurface materials adjacent to lakes in the context of understanding nutrient loadings to large lakes.