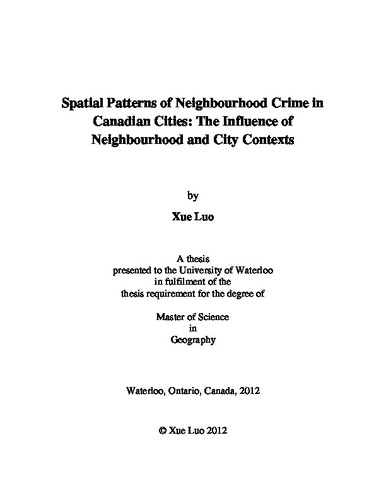 The main goal of this study is to investigate the spatial patterns of police-reported crime rates across select Canadian urban neighbourhoods and to explore their relationships with both neighbourhood- and city-level characteristics, as well as neighbourhood spatial dependence. Analyses were based on aggregated data from the 2001 Incident-Based Uniform Crime Reporting Survey (UCR2) and the Census of Population for six Canadian cities: Edmonton, Halifax, Montreal, Saskatoon, Thunder Bay and Toronto. Exploratory spatial data analysis (ESDA) was used to examine the spatial distribution of crime as well as to test for spatial dependence in the crime data. By using multilevel modelling and spatial regression techniques, neighbourhood violent and property crime rates were modeled respectively as a function of both city- and neighbourhood-level contextual variables while controlling for spatial dependence. The results show that crime is not distributed randomly, but tends to be concentrated in particular neighbourhoods, notably around the city centers of these cities. Neighbourhood variance in crime rates is not only dependent on local neighbourhood characteristics, but also on the characteristics of surrounding neighbourhoods, as well as the broader city environment where neighbourhoods are embedded. These findings suggest that strategies aimed at preventing or reducing crime should be developed in light of specific local neighbourhood contexts, while taking into account social forces external to the immediate neighbourhood in the wider social environment.