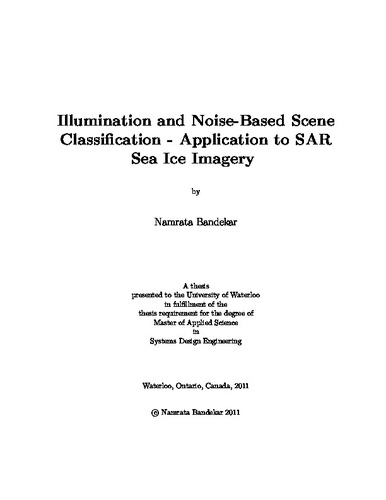 Spatial intensity variation introduced by illumination changes is a challenging problem for image segmentation and classification. Many techniques have been proposed which focus on removing this illumination variation by estimating or modelling it. There is limited research on developing an illumination invariant classification technique which does not use any preprocessing. A major focus of this research is on automatically classifying synthetic aperture radar (SAR) images. These are large satellite images which pose many challenges for image classification including the incidence angle effect which is a strong illumination variation across the image. Mapping of full scene satellite images of sea-ice is important for navigational purposes for ships and also for climate research. The images obtained from the RADARSAT-2 satellite are dual band, high quality images. Currently, sea ice chart are produced manually by ice analysts at the Canadian Ice Service. However, this process can be automated to reduce processing time and obtain more detailed pixel-level ice maps. An automated classification algorithm to achieve sea ice and open water separation will greatly help the ice analyst by providing sufficient guidance in the initial stages of creating an ice map. It would also help the analyst to improve the accuracy while finding ice concentrations and remove subjective bias. The existing Iterative Region Growing by Semantics (IRGS) algorithm is not effective for full scene segmentation because of the incidence angle effect. This research proposes a "glocal" (global as well as local) approach to solve this problem. The image is divided in a rectangular grid and each rectangle is segmented using IRGS. This is viewed as an over-segmentation of the original image. Finally, IRGS is used globally to glue together the over-segmented regions. This method yields acceptable results with the denoised images. The proposed technique can also be used for general image classification purposes. Extensive testing was done to investigate the best set of parameters for the proposed approach. Images were simulated with the SAR illumination variation and multiplicative speckle noise. The technique was effective for general classification and attained accurate results for full scene SAR segmentation.