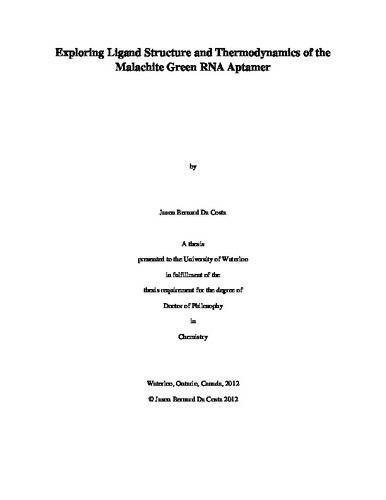 RNA aptamers are in vitro sequences of RNA that have a high affinity for their target ligand. They have applications in therapeutics, biosensors and molecular machines. While the practical applications of aptamers are increasing, it is important to study their structure and thermodynamics to improve the understanding of these molecular tools. The malachite green aptamer (MGA) provides a model system to study the interactions between aptamer and ligand that do not involve hydrogen bonding between ligand and receptor. While the original application of this aptamer was abandoned, study of the MGA binding pocket revealed an electronegative environment that was harnessed for catalysis. MGA binding also supported the notion that aptamers bind by adaptive binding. Adaptive binding is the ability of molecules to mold themselves around the structure of a ligand thereby incorporating it into their three-dimensional fold. To further expand our understanding of MGA binding and to clarify conflicting reports of affinities, we conducted isothermal calorimetry binding studies. The results reveal that the entropy of complex formation plays a large role in determining binding affinity and ligand specificity. This data combined with previous structural studies show that metal ions are required to stabilize the complexes with non-native ligands, whereas, the complex with the original selection target is stable at low salt and in the absence of divalent metal ions. Next, competitive binding studies using isothermal titration calorimetry were conducted with the aim of understanding the adaptive nature of RNA. The results of these studies reveal that there are limits to the adaptability of the aptamer. Binding of one type of ligand reduces the affinity of the aptamer pocket to a differently shaped ligand, even if this second ligand has a significantly higher affinity. The ability of MGA to change ligand preference based on buffer conditions, and the previously reported catalysis suggested that RNA may have a potential supporting multiple functions in the same molecule. To investigate this possibility we attempted to select an aptamer that supports both ligand binding and catalysis. By conducting both a DNA and RNA selection we hoped to add to the iv collection of DNA and RNA aptamers selected for the same target. There are currently too few of these to determine if any correlation can be made between DNA and RNA sequences that bind the same target. The target of the selection was fluorescein diacetate (FDA), which was chosen with the aim that it would allow the exploration of the inherent potential of the selected aptamer to cleave FDA to fluorescein. The RNA selection proved to be more successful and an attempt was made to characterize the binding of the aptamer to its target fluorescein diacetate. Unfortunately there were complications with the binding assays, but future work is proposed that should address the issues. In order to expand the MGA catalytic repertoire attempts were made to synthesize new ligands that could exploit the catalytic potential of the MGA binding pocket. Unfortunately these attempts were unsuccessful, however further attempts are recommended. The MGA used in this study was transcribed in vitro using T7 RNA polymerase. This process is known to add extra nucleotides to the end of the transcription product. Attempts were made to eliminate the n+1 product by introducing a ribozyme or DNAzyme. These were met with difficulties resulting in low yield, however mass spectrometry revealed that n and n+1 MGA bind to ligand. This, along with secondary structure prediction suggests that MGA n+1 behaves the same as n. Overall, the results presented here provide insights into the capabilities of RNA aptamers with respect to ligand binding and catalysis.