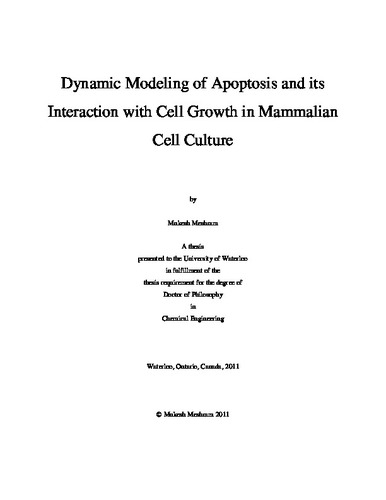 In order to optimize productivity of a cell culture it is necessary to understand growth and productivity and couple these features of the culture to extracellular nutrients whose profiles can be manipulated. Also, since growth and productivity are directly affected by cell death mechanisms such as apoptosis, it is imperative to understand these mechanisms. This work describes the development of a differential equation based population balance model of apoptosis in a Chinese Hamster Ovary cell culture producing Anti-RhD monoclonal antibody (mAb). The model was verified in isolation and was then coupled to a metabolic flux model. The model distinguishes between various subpopulations at normal healthy states and at various stages of apoptosis. After finding that glucose and glutamine are not limiting nutrients for this culture, different hypotheses were explored to explain growth arrest. Initially, it was hypothesized that there is some unknown nutrient in either media or serum which is depleted, thus causing growth arrest. Accordingly a first model was developed assuming depletion of this nutrient. Subsequent experiments with different additions of media and serum showed that there is no such nutrient limitation for the media and serum conditions used in most of the experiments. Additional experiments with different culture volumes showed that cell growth was actually controlled by a compound that accumulates and causes pH deviation from its optimal range of operation. Since strong correlations were found between culture volume and growth, it was hypothesized that the compound may be carbon dioxide (CO2), which is inhibitory for growth and may accumulate due to mass transfer limitations. Following this finding, a second model was proposed to take into account the accumulation of this inhibitor, although the specific inhibiting compound could not be exactly identified. This second mathematical model of cell growth was then integrated with a metabolic flux model to provide for a link between intracellular and extracellular species balances, since the latter are the ones to be manipulated for increasing productivity. This final model formulation was then used to describe mAb productivity. The model was also able to reasonably predict all cell subpopulations, nutrients, metabolites and mAb. In an attempt to mitigate the effect of CO2 accumulation and renew the cell growth, culture perfusions were performed. Although this approach resulted in some renewal of growth, the cell concentration progressively decreased after each successive perfusion event. This suggests that irreversible cell damage occurs because of CO2 accumulation. The model was used to describe the perfusion experiments. Agreement between data and model predictions were reasonable. In addition, it was shown that operation with successive perfusions results in a significant increase in productivity and therefore it can be used for further process optimization.