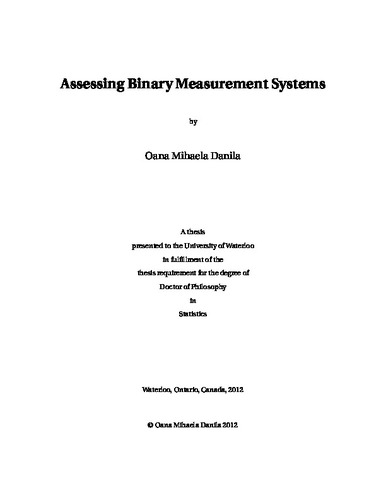 Binary measurement systems (BMS) are widely used in both manufacturing industry and medicine. In industry, a BMS is often used to measure various characteristics of parts and then classify them as pass or fail, according to some quality standards. Good measurement systems are essential both for problem solving (i.e., reducing the rate of defectives) and to protect customers from receiving defective products. As a result, it is desirable to assess the performance of the BMS as well as to separate the effects of the measurement system and the production process on the observed classifications. In medicine, BMSs are known as diagnostic or screening tests, and are used to detect a target condition in subjects, thus classifying them as positive or negative. Assessing the performance of a medical test is essential in quantifying the costs due to misclassification of patients, and in the future prevention of these errors. In both industry and medicine, the most commonly used characteristics to quantify the performance a BMS are the two misclassification rates, defined as the chance of passing a nonconforming (non-diseased) unit, called the consumer's risk (false positive), and the chance of failing a conforming (diseased) unit, called the producer's risk (false negative). In most assessment studies, it is also of interest to estimate the conforming (prevalence) rate, i.e. probability that a randomly selected unit is conforming (diseased). There are two main approaches for assessing the performance of a BMS. Both approaches involve measuring a number of units one or more times with the BMS. The first one, called the "gold standard" approach, requires the use of a gold-standard measurement system that can determine the state of units with no classification errors. When a gold standard does not exist, is too expensive or time-consuming, another option is to repeatedly measure units with the BMS, and then use a latent class approach to estimate the parameters of interest. In industry, for both approaches, the standard sampling plan involves randomly selecting parts from the population of manufactured parts. In this thesis, we focus on a specific context commonly found in the manufacturing industry. First, the BMS under study is nondestructive. Second, the BMS is used for 100% inspection or any kind of systematic inspection of the production yield. In this context, we are likely to have available a large number of previously passed and failed parts. Furthermore, the inspection system typically tracks the number of parts passed and failed; that is, we often have baseline data about the current pass rate, separate from the assessment study. Finally, we assume that during the time of the evaluation, the process is under statistical control and the BMS is stable. Our main goal is to investigate the effect of using sampling plans that involve random selection of parts from the available populations of previously passed and failed parts, i.e. conditional selection, on the estimation procedure and the main characteristics of the estimators. Also, we demonstrate the value of combining the additional information provided by the baseline data with those collected in the assessment study, in improving the overall estimation procedure. We also examine how the availability of baseline data and using a conditional selection sampling plan affect recommendations on the design of the assessment study. In Chapter 2, we give a summary of the existing estimation methods and sampling plans for a BMS assessment study in both industrial and medical settings, that are relevant in our context. In Chapters 3 and 4, we investigate the assessment of a BMS in the case where we assume that the misclassification rates are common for all conforming/nonconforming parts and that repeated measurements on the same part are independent, conditional on the true state of the part, i.e. conditional independence. We call models using these assumptions fixed-effects models. In Chapter 3, we look at the case where a gold standard is available, whereas in Chapter 4, we investigate the "no gold standard" case. In both cases, we show that using a conditional selection plan, along with the baseline information, substantially improves the accuracy and precision of the estimators, compared to the standard sampling plan. In Chapters 5 and 6, we investigate the case where we allow for possible variation in the misclassification rates within conforming and nonconforming parts, by proposing some new random-effects models. These models relax the fixed-effects model assumptions regarding constant misclassification rates and conditional independence. As in the previous chapters, we focus on investigating the effect of using conditional selection and baseline information on the properties of the estimators, and give study design recommendations based on our findings. In Chapter 7, we discuss other potential applications of the conditional selection plan, where the study data are augmented with the baseline information on the pass rate, especially in the context where there are multiple BMSs under investigation.