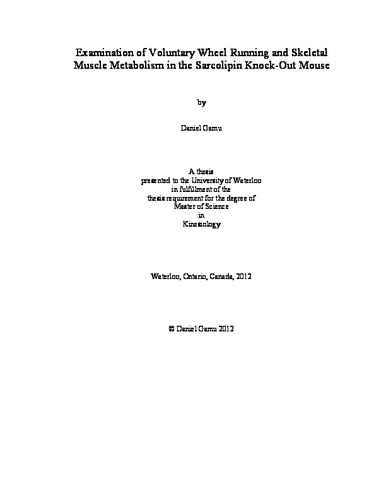 Sarcolipin (SLN) is a small sarcoplasmic reticulum (SR) integral membrane protein that regulates the SR Ca2+-ATPase (SERCA). Previous studies indicate that the functional interaction between SLN and SERCA is thermogenic in nature. Recently, SLN knock-out (SLNKO) mice have been shown to develop excessive obesity and glucose intolerance when placed on a high-fat diet (HFD; 42% kcal derived from fat) relative to wild-type (WT) littermates, implicating SLN in diet-induced obesity. The purpose of this thesis was two-fold: 1) to determine whether an excessively obese phenotype persists when SLNKO mice are given access to voluntary exercise, and 2) to determine if SLN ablation results in a deficit in skeletal muscle oxidative capacity, given the integral role cellular Ca2+ plays in mitochondrial metabolism. Mice were fed either standard chow or a HFD for 8 weeks, and remained sedentary or given access to voluntary running wheels during this period. Glucose tolerance was assessed pre- and post-diet, along with weight gain and adiposity. Skeletal muscle succinate dehydrogenase (SDH), citrate synthase (CS), cytochrome c oxidase (COX), and 3-hydroxyacyl CoA dehydrogenase (ß-HAD) activities were measured in the soleus (SOL) and extensor digitorum longus (EDL) of both chow- and high-fat fed sedentary mice. Both average daily running distance and total exercise volume were not different between WT and SLNKO mice given voluntary running wheels. As before, sedentary SLNKO mice gained more mass following the HFD relative to WT counterparts (P < 0.05); however, no difference in mass gain existed between genotype for voluntary exercising mice on a HFD. Despite this, SLNKO animals were more obese and glucose intolerant following high-fat feeding, regardless of activity status (P < 0.05). Under chow-fed conditions COX activity was higher in the EDL of SLNKO mice (P < 0.05), while no differences in SDH, CS, or ß-HAD existed between genotype in either muscle group. Following the HFD, no changes in mitochondrial enzyme activities within the SOL existed. COX activity in the EDL remained elevated in SLNKO mice post-HFD (P < 0.001), while ß-HAD increased in both WT and SLNKO animals relative to chow-fed controls (P < 0.05). These findings suggest that increasing energy expenditure through voluntary activity cannot compensate for increased basal SERCA Ca2+-pumping efficiency during caloric excess. Additionally, ablation of SLN does not result in a metabolic deficit within skeletal muscle, nor does it limit the adaptive enzymatic response of SLNKO mice to high-fat feeding. Thus, the findings of this study provide further support of the view that SLN’s thermogenic role is the primary mechanism of diet-induced obesity in SLNKO mice.