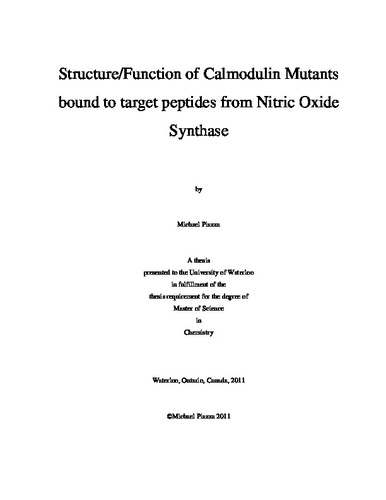 Calmodulin (CaM) is a ubiquitous calcium binding protein that responds to intracellular Ca2+ and is proposed to be involved in the binding of over 300 functionally and structurally diverse proteins. It is a highly conserved eukaryotic protein comprised of an N- and C- terminal lobe separated by a highly flexible central linker region. Each of these lobes contains two EF hand motifs that are each capable of binding to one Ca2+-ion. CaM is found to exist primarily in two states: the Ca2+ bound form, holo-CaM, or the Ca2+ free form, apo-CaM. Both forms of CaM are able to bind to target proteins. CaM also undergoes post translational modifications that play a role in its regulation of target proteins. One of these important target proteins is nitric oxide synthase (NOS). NOS catalyzes the conversion of L-arginine to L-citrulline and nitric oxide (·NO). There are three isoforms of NOS found in mammalian cells: endothelial (eNOS); neuronal (nNOS); and inducible (iNOS) nitric oxide synthases. All three isoforms of NOS are comprised of an N-terminal heme domain and a C-terminal flavin-binding domain containing FAD-, FMN-, and NADPH- binding sites, linked together by a CaM-binding region. The nNOS and eNOS isoforms are constitutively expressed and are Ca2+-CaM-dependent. In contrast, iNOS is regulated at the transcriptional level and is classified as Ca2+-independent. The exact mechanism of how CaM activates NOS is not fully understood. Studies have shown CaM to act like a switch that causes a conformational change in NOS to allow for the electron transfer between the reductase and oxygenase domains through a process that is thought to be highly dynamic. This study is focused on the structure and function of CaM and CaM mutant constructs bound to the target peptides of the NOS CaM-binding region. The structural dynamics were monitored by nuclear magnetic resonance (NMR) spectroscopy. NMR spectroscopy is an efficient method for studying the dynamics and structures of protein-protein and protein-peptide complexes. The investigation of CaM bound to the CaM-binding region of the inducible nitric oxide synthase (iNOS) isoform of NOS proved to be difficult due to the propensity of the iNOS CaM-binding domain to aggregate when not bound to CaM. In the present study, an isotopically labeled peptide of the CaM-binding region of iNOS has successfully been expressed, purified and characterized by NMR spectroscopy. These results demonstrate an efficient approach for the expression and purification of individually stable isotope labeled protein complexes for NMR analysis, even if one partner is prone to aggregation or has very low solubility. The solution structures of CaM bound to the iNOS and eNOS CaM-binding region peptides were determined. In addition, the effect of CaM phosphorylation was investigated. The tyrosine 99 (Y99) residue of CaM is reported to be phosphorylated in vivo. In the present study, a phosphomimetic Y99E CaM was produced to investigate the structural and functional effects that the phosphorylation of this residue may have on nitric oxide production. All three mammalian NOS isoforms were included in the investigation. Our results show that a phosphomimetic Y99E CaM significantly reduces maximal synthase activity of eNOS by 40 % while having little effect on nNOS and iNOS activity. A comparative NMR study between phosphomimetic Y99E CaM and wild type CaM bound to the eNOS CaM-binding region peptide was performed. This investigation provides important insights into the effects that CaM phosphorylation has upon the binding and activation of the NOS enzymes.