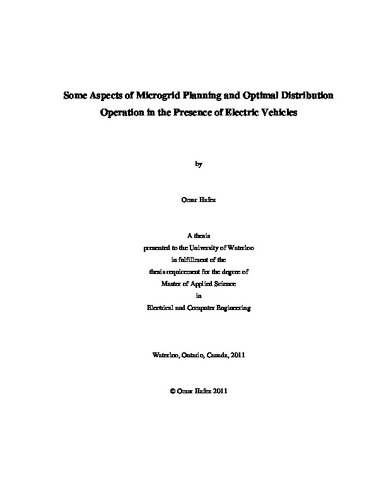 Increase in energy demand is one of the major challenges that utilities are faced with, thus resulting in an increase in environmental pollution and global warming. The transport sector has a significant share of the energy demand and is a major contribution of emissions to the environment. In Canada, almost 35% of the total energy demand is from the transport sector and it is the second largest source of greenhouse gas (GHG) emissions. The government of Ontario has aimed to move toward a green energy economy, thus resulting in increased penetration of renewable energy sources as well as Plug-in hybrid electric vehicle (PHEV) technology. Penetration of renewable energy sources into microgrids are gradually being recognized as important alternatives in supply side planning. This thesis focuses on the optimal design, planning, sizing and operation of a hybrid, renewable energy based microgrid with the goal of minimizing the lifecycle cost, while taking into account environmental emissions. Four different configurations including a diesel-only, a fully renewable-based, a diesel-renewable mixed, and an external-grid connected microgrid are designed, to compare and evaluate their economics, operational performance and environmental emissions. Analysis is also carried out to determine the break-even economics for a grid-connected microgrid. The well-known energy modeling software for hybrid renewable energy systems, HOMER, is used in the studies reported in this thesis. An optimal power flow (OPF) based optimization framework considering two different objectives, minimizing feeder losses and PHEV charging cost, are presented to understand the impact of PHEV charging on distribution networks. Three different charging periods are considered and the impact of the Ontario Time-of-Use (TOU) tariff on PHEV charging schedules is examined. The impact of PHEV charging on distribution systems in the presence of renewable energy sources is discussed by extending the developed OPF based model to include the contribution of renewable energy sources. The proposed model is evaluated under a variety of scenarios.

Omar Hafez (2012). Some Aspects of Microgrid Planning and Optimal Distribution Operation in the Presence of Electric Vehicles. UWSpace. http://hdl.handle.net/10012/6461