Where the River Flows Fast 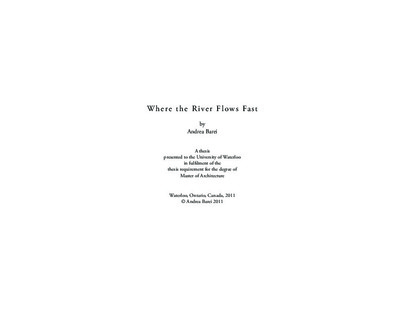 Kashechewan, a flood-prone remote First Nation in northern Ontario, is the focus of this thesis. It is an exploration into the factors that have contributed to the community’s decline and current state. By looking at how these factors influence built form, the principles, possibilities, and concepts that are latent within it are used to re-establish ways in which the people can view, value, and act upon the land to create lasting change. The discussion has larger implications about how we, as Canadians, live with the land and built forms, and react to one another both as a collective, and as individuals. It is an attempt to dissolve the distinction between ‘aboriginal’ and ‘colonizer’ to open up greater design possibilities. Composed as a series of explorations into the physical and spiritual form of the community, this thesis weaves together three parts of its larger story connected with the thread of narrative poem. Part I opens a discourse that considers the impact of the system and establishment of Aboriginal Reserves on the community. Part II explores the notion of remoteness alongside methods of movement and transportation of people and materials. Part III engages the ephemeral, discussing memory and the meaning of transient moments. Stemming from these streams of exploration, three individual designs are proposed. The first explores flood-resilient architecture as a sensitive response to the river and engages the future expansion of the community beyond the walls of the dike. The second envisions an integration of movement into a centralized community hub. The third lays out an approach to abandoning the site while preserving its sacred spaces. In each case, the design explores built form as a tool for fusing back together the spirit of the land and the narrative of the people. Through the metaphor of flooding as a conversation between the light and the dark, this thesis looks at the history of abuse between aboriginal and colonizer, and the current abuse of substance and soul from which an architectural premise moves forward. The thesis attempts to embrace the complexity and difficulty of designing with such inherent obstacles to overcome by taking inspiration from the simple and sublime beauty of the place and distilling it into built form.