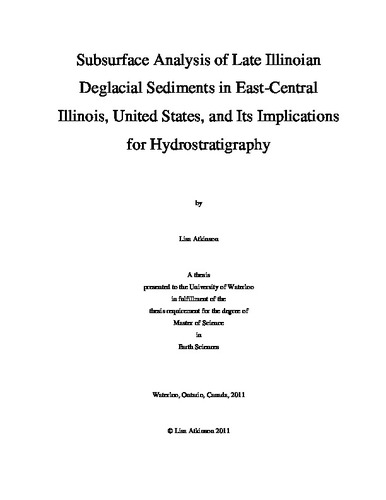 During the Illinoian glaciation (approximately 180,000 to 125,000 years ago) glacial lobes advancing into Illinois deposited an extensive till sheet (i.e., the Vandalia Member till). However, very little is known about the retreat phase that followed this major ice advance. Erosional events and the heterogeneous sediments associated to the Illinoian deglaciation may also have important hydrogeologic implications. Specifically, the occurrence and emplacement of these heterogeneous deposits, informally referred to as the Glasford deglacial unit, into and overlying the Vandalia Member till, may impact the integrity of this extensive till aquitard, and possibly influence groundwater flow to the deeper and regionally important Mahomet aquifer. Thus, the purpose of this research is to improve knowledge of the heterogeneous character of the Glasford deglacial sediments and their three-dimensional (3-D) hydrostratigraphic architecture. The methodology to study the Glasford deglacial unit relies on the detailed analysis of 7 continuous cores and interpretations of 4 geophysical profiles, which provide key stratigraphic control to estimate unit geometry and establish the vertical succession of facies assemblages in the unit. A 3-D geological model was created using gOcad®, a geomodelling software, across a 2642 square kilometer study area and the deglacial unit having a subsurface volume domain of 5.70E+9 cubic meters. Utilizing all available data sources including 38 continuous cores, 69 downhole geophysical logs, 799 driller’s logs, and 4 near-surface geophysical profiles; triangulated surfaces were interpolated representing the top and bottom of the Glasford deglacial unit and key internal layers. These surfaces provided a framework for a 3-D cellular partition, where descretizing the model allowed for mapping of hydrofacies assemblages that represented mappable heterogeneities of coarse- and fine-grained sediment in the Glasford deglacial unit. Results of the subsurface facies analysis led to the identification of three main facies types that form the Glasford deglacial unit: 1) massive, matrix-supported diamicton; 2) interstratified sand and gravel; and 3) fine-grained massive and/or bedded sediment. Using key seismic reflectors and interpretations based on near-surface seismic profiles as well as geologic logs from numerous boreholes, these facies were assigned to two features of possible regional extent: 1) a broad channelized erosion surface informally named the Champaign valley; and 2) an extensive tabular unit overlying the valley fill and extending across the entire study area. Grouping of facies into distinct facies assemblages was useful to distinguish sediments that in-fill either the Champaign valley or compose the tabular unit. Major heterogeneities have been recognized in these features and mapped at regional scale represented by fine- and coarse-grained sediment assemblages that comprise 46% and 54% respectively of the Glasford deglacial unit volume. Laterally continuous coarse-grained sediment assemblages are primarily located in the Champaign valley and potentially represent local aquifers of limited but usefully productivity for east-central Illinois. These small aquifers are characterized by hydraulic conductivities ranging from 1.07E-3 m/s to 1.78E-6 m/s. Fine-grained sediment assemblages have an average hydraulic conductivity value of 4.38E-8 m/s and thus may represent discontinuous aquitards impeding water flow. However, these fine-grained sediment assemblages cannot be considered homogeneous aquitards because of their textural variability and limited lateral continuity. The geological model developed in this study contributes to better understanding the complex subsurface geology in east-central Illinois. Results of this study confirm the high degree of heterogeneity in the Glasford deglacial unit that includes features of glacial erosion, and these findings question, at least locally, the integrity of the underlying Vandalia Member till as a regional aquitard unit. Overall, the Glasford deglacial unit is a complex subsurface ice-marginal package of sediments, which challenges the aquifer-aquitard concept. It is argued herein that some ice-contact or ice-marginal sediments units may be laterally extensive as a whole, yet internally too heterogeneous to be mapped as an aquifer or aquitard at a regional scale. A new conceptual hydrostratigraphic layer, the hybrid layer (part-aquifer/ part-aquitard), is thus proposed to better describe these units. This new hybrid layer is meant to augment the traditional aquifer/aquitard concept representing hydrostratigraphic bodies that may not form laterally extensive aquifer or aquitard units. These hybrid layers may better represent conceptually the complex ice-marginal deposits that are found across east-central Illinois, and perhaps other similar areas affected by glacial lobe fluctuations during multiple glaciations.