The Intermodal Metropolis: Spatial Protocols at the Convergence of Regional Mobility Networks 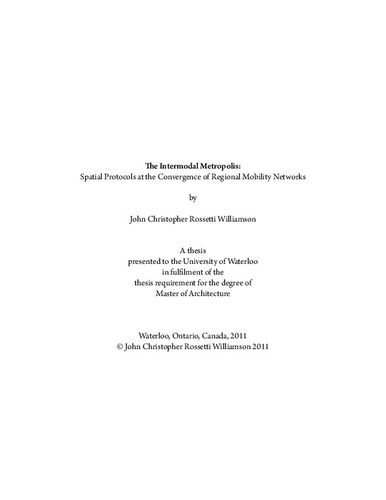 Suburban Centres were established in the Toronto region as the population dispersed beyond the city’s borders. Intended as a set of delivery points for municipal services and concentrations of commercial and social program serving local suburban residents, government policy and market forces are now encouraging these centres to accumulate a greater range of program, and absorb a significant share of population growth. They have a mandate to orient new residents toward improved public transit routes as a relief for overburdened road infrastructure, but their fundamental role as a suburban downtown requires continued accessibility by car. The structure of the suburbs is fixed, dominated by the car as the primary element of an extensive mobility system that has generated its own spatial protocols and building typologies. The morphology of older urban areas was developed in response to the parameters of streetcar service and human abilities, and also shows a resistance to change. The two mobility systems co-exist, each with their own associated territories, creating an intermodal metropolis. In suburban centres, the intensive urban mobility extends into the reach of the suburban territory, creating a threshold condition that requires a hybrid morphology to serve both. The design adopts Scarborough Centre as a test site, proposing a morphology that accommodates urban and suburban mobility by embracing the suburban planning paradigm that separates vehicle traffic from public space. The interaction between the two networks is managed to create variations in accessibility characteristics that determine programmatic distribution. The public realm is compartmentalized into differentiated spaces that support a highly permeable pedestrian network integrated with the central transit station. The proposal allows Scarborough Centre to expand its public space network without compromising its function as a highly accessible suburban downtown.