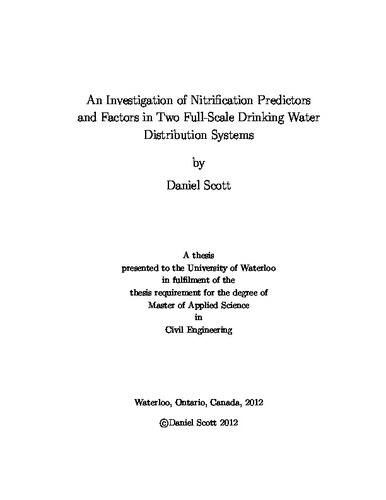 The biologically-mediated process of nitrification can occur in chloraminated drinking water distribution systems. In this process, ammonia is oxidized to nitrite by ammonia-oxidizing bacteria (AOB) and archaea (AOA). In complete nitrification, nitrite is further converted to nitrate by nitrite-oxidizers; however, bacterial mediation of this step is less critical as a chemical-oxidation pathway also exists. The initial conversion of ammonia to nitrite is also more critical due to its role in the degradation of the disinfectant residual. Nitrification is affected by factors such as the concentrations of ammonia and total chlorine, the pH of the drinking water, and the temperature. The key consequence of distribution system nitrification is an accelerated decay of the disinfectant residual; it can also lead to increases in nitrite and nitrate, and a potential proliferation of heterotrophic bacteria. The goal of this thesis is to enhance understanding of distribution system nitrification; one aspect to this goal is the evaluation of models for nitrification. The approach followed in this study was to collect water samples from two full-scale distribution systems in Southern Ontario. In the first phase, a sampling campaign was conducted at sites in these systems, with water samples being analyzed for parameters considered relevant to nitrification, such as the concentrations of nitrogen species affected by nitrification, the disinfectant residual, and the levels of ammonia-oxidizing microorganisms. In the second phase, batch tests were conducted with water from these same distribution systems. In the course of the field sampling campaign some indications of nitrification were detected, but there were no severe nitrification episodes as indicated by major losses of the disinfectant or prolonged elevations in nitrite levels. On some occasions at some sites there were small rises in nitrite above baseline levels; moderate declines in total chlorine residual were also seen. Nitrifying microorganisms were present in most samples, as detected by both culture-based and molecular methods (PCR). The latter was able to distinguish AOA from AOB; both were detected in the systems included in this study, with AOB gene counts outnumbering those of AOA at most sites. Using Spearman non-parametric correlations, significant correlations were found between some parameters relevant to nitrification. Notably, AOB were found to be positively correlated with heterotrophic plate counts (HPC), reinforcing the latter's role as a useful indicator of microbial regrowth conditions in a distribution system. Also of interest is the negative correlation between total chlorine residual and levels of microorganisms, reminding drinking water professionals of the value of maintaining a stable disinfectant residual. Batch testing investigations compared total chlorine decay curves between inhibited and uninhibited samples to provide insight into the microbial contribution to disinfectant decay. Four types of decay curves were identified, with qualitative differences in the microbial contribution to the disinfectant residual decay. Liquid chromatography with organic carbon detection (LC-OCD) was applied to investigate changes in the character of the dissolved organic carbon over the course of the batch tests. Based on the results of this study, it is recommended to evaluate the results of nitrification batch tests based on a visual identification of the curve type and calculation of the decay rates and critical threshold residual (CTR), rather than relying on the microbial decay factor alone to express the results. An application of this work was in making comparisons to some models for nitrification proposed in the literature. The ultimate goal of these models is to provide drinking water system operators with a prediction of when nitrification episodes will occur so that action may be taken to avert them. The models considered in this study differ in their degree of complexity and in whether they are based on mechanistic considerations. The differences in the underlying principles and data required for analysis make these models suitable for different applications. The results of this evaluation support the use of the model of Fleming et al. (2005) in full-scale distribution systems and the use of the model by Yang et al. (2008) for research applications, while the other models considered can still offer some useful insights. The results of this research can be applied to monitoring and operational practices in chloraminated distribution systems where nitrification is a potential concern. The correlations between parameters that have significance to distribution system nitrification that were found in this study, along with the modelling and batch testing evaluated in this work, can provide insight into predicting conditions favourable to nitrification and avoiding or averting nitrification episodes.