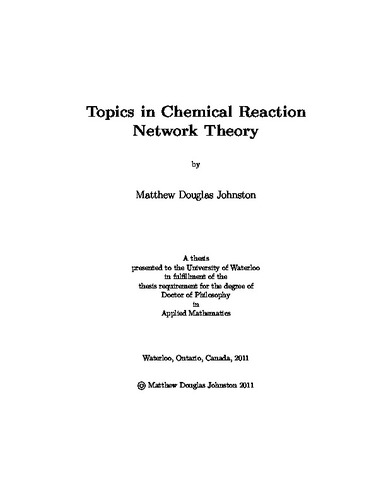 Under the assumption of mass-action kinetics, systems of chemical reactions can give rise to a wide variety of dynamical behaviour, including stability of a unique equilibrium concentration, multistability, periodic behaviour, chaotic behaviour, switching behaviour, and many others. In their canonical papers, M. Feinberg, F. Horn and R. Jackson developed so-called Chemical Reaction Network theory which drew a strong connection between the topological structure of the reaction graph and the dynamical behaviour of mass-action systems. A significant amount of work since that time has been conducted expanding upon this connection and fleshing out the theoretical underpinnings of the theory. In this thesis, I focus on three topics within the scope of Chemical Reaction Network theory. 1. Linearization: It is known that complex balanced systems possess within each invariant space of the system a unique positive equilibrium concentration and that that concentration is locally asymptotically stable. F. Horn and R. Jackson determined this through the use of an entropy-like Lyapunov function. In Chapter 4, I approach this problem through the alternative approach of linearizing the mass-action system about its equilibrium points. I show that this approach reproduces the results of F. Horn and R. Jackson and has the advantage of being able to give explicit exponential bounds on the convergence near equilibria. 2. Persistence: A well-known limitation of the theory is that the stabilities of the positive equilibrium concentrations guaranteed are locally limited. The conjecture that the equilibrium concentrations of complex balanced systems are global attractors of their respective invariant spaces has become known as the Global Attractor Conjecture and has received significant attention recently. This theory has been significantly aided by the realization that trajectories not tending toward the set of positive equilibria must tend toward the boundary of the positive orthant; consequently, persistence is a sufficient condition to affirm the conjecture. In Chapter 5, I present my contributions to this problem. 3. Linear Conjugacy: It is known that under the mass-action assumption two reaction networks with disparate topological structure may give rise to the same set of differential equations and therefore exhibit the same qualitative dynamical behaviour. In Chapter 6, I expand the scope of networks which exhibit the same behaviour to include ones which are related by a non-trivial linear mapping. I have called this theory Linear Conjugacy theory. I also show how networks exhibiting a linear conjugacy can be found using the mixed integer linear programming (MILP) framework introduced by G. Szederkenyi.