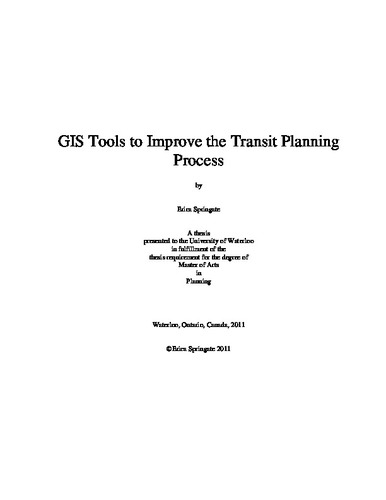 Public transit provides an important community service by reducing pollution, traffic congestion, and by providing transportation for those who do not or cannot drive. Yet since the 1950s, real investment levels in transit have declined in many North American cities which has resulted in diminished service levels and ridership. In order for transit agencies to attract more riders, transit service must be competitive with alternative modes of transport, particularly private automobiles. However, since funding is limited, planning staff must ensure that the service changes that are implemented result in the greatest benefits to the system. This thesis presents an iterative approach to evaluating service changes in a transit network that combines the output from sophisticated transportation models, demographic data, and software analysis with local knowledge and expertise. The thesis focuses specifically on three common challenges in transit planning: quantifying costs of transfers between destinations within a system, examining access distances to transit as a measure of transit supportiveness, and estimating ridership changes resulting from small route adjustments. Three GIS-based tools, referred to as the Transfer, Access and Route Planning Tools, were developed to address these challenges and were demonstrated using transit system data from the Region of Waterloo in Southwestern Ontario. The Transfer Tool was used to highlight trips with high transfer costs to determine which changes in the route structure would result in the greatest reduction of the generalized cost of a trip attributed to transfers. Results from the Access Tool and Route Planning Tools demonstrated how changes to the streets along which transit routes operate influence access distances to transit, and further, transit ridership. The Access Tool also demonstrated how the design of the street network and the presence of pedestrian paths may affect access distances. Finally, this thesis concludes by recommending areas of future research.