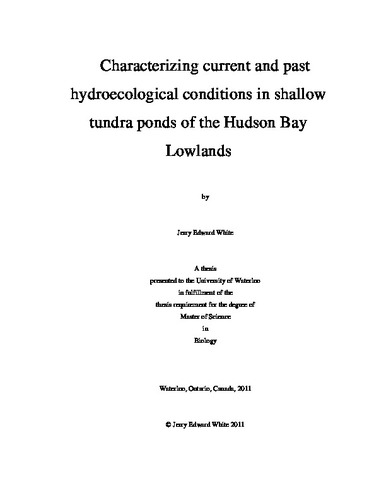 Due to accelerated climatic warming during the past fifty years, interest and concerns have been growing about changes in the ecological integrity of shallow freshwater ponds that dominate the landscape of the Hudson Bay Lowlands (HBL). Climatic warming is altering the hydrological processes that influence the water balances in these ponds, but knowledge remains insufficient to determine the effects these changes have on ecological conditions in the ponds. To address this knowledge gap, this study examines the relations between current hydrological and limnological conditions and recently deposited sedimentary assemblages of diatoms and photosynthetic pigments in 23 shallow ponds in the HBL. The knowledge from the contemporary studies will be used to inform paleolimnological reconstructions using multiple proxies at two ponds to assess how hydroecological conditions have changed during the past several centuries in response to climatic variations. Water samples were collected three times in 2010 to explore the relations between current hydrological and limnological conditions. The climatic conditions in 2010 provided an excellent opportunity to assess the effects that continued climate warming may exert on hydrolimnological conditions in the study ponds as the warm, dry conditions during the early thaw-season (May- mid-July) followed by extremely wet conditions for the remainder of the thaw-season are likely representative of future climate scenarios. The analysis revealed that the water chemistry in the ponds evolved along one of four different ‘trajectories’ throughout the thaw-season in 2010. These seasonal patterns of limnological conditions closely aligned with similar patterns identified in a study of contemporary hydrological conditions (Light, 2011; Wolfe et al., 2011). The patterns identified in both the hydrological and limnological studies were attributed to differences among ponds in catchment characteristics and hydrological connectivity with adjacent basins. Surface sediment samples were collected in 2010 to determine if hydrolimnological conditions are reflected in the distribution of recently deposited diatom and pigment communities. It was determined that diatom community composition was most highly influenced by the availability of microhabitat in the ponds which did not appear to be controlled by hydrological conditions. Nitrogen availability was determined to be indirectly influencing diatom community composition as the nitrogen-limited conditions in the ponds favoured the proliferation of N2-fixing cyanobacterial mats that provided a large amount of epiphytic habitat in the majority of the study ponds. This resulted in the complete domination of diatom assemblages by one diatom specie that was closely associated with these algal mats in the surface sediments of most ponds. Aphanizophyll, a photosynthetic pigment representative of nitrogen-fixing cyanobacteria, was also in the highest concentration in most of the study ponds as a result of the nitrogen-limiting conditions that allowed these organisms to dominate. Ponds located in the tundra ecozone were also found to have the highest overall pigment concentration which was related to a longer growing season due to the small size of these ponds that resulted in earlier ice-off conditions. The longer growing season of ponds in the tundra ecozone may also be due to high winds that cause a decrease in snow cover, lower surface albedos and an earlier onset of the spring thaw. The paleolimnological reconstruction of two of the ponds revealed similar shifts in diatom community composition in the stratigraphic record even though patterns of past change in their basin hydrology, as explored though the analysis of the δ18OPW record archived in the aquatic cellulose contained in the pond sediments, was very different. The water balance of “Left Lake” was found to be highly influenced by increased evaporation associated with recent warming trends as it is a relatively small basin that becomes hydrologically isolated after the melt period. However, “Erin Lake” was not as susceptible to evaporation during the recent warming trend due to its larger catchment and hydrological connections to other ponds. Both of these ponds experienced marked changes in the diatom assemblages. The changes were characterized by a shift from assemblages containing both small, adnate, benthic taxa that prefer mineral grain substrates and epiphytic taxa that are associated with the cyanobacterial mats covering the pond bottoms to assemblages entirely dominated by epiphytic taxa. The shift in diatom community composition occurred ~1820 in Left Lake, but the timing cannot be determined with any degree of confidence in Erin Lake as no diatoms are observed in the sediment record during the period when the change occurred (~1550 to 1850) due to preservation issues. Analysis of fossil pigments indicates that nitrogen-fixing cyanobacteria have been important to the ecology of the ponds over the entire sediment record. However, there is a trend towards lower concentrations of pigments representative of N2-fixing cyanobacteria in the most recent sediments. The trend in cyanobacterial pigment concentrations coincides with inferred changes in nitrogen availability from the geochemical analysis of the pond sediments by Light (2011). This recent shift in nutrient status may be the result of a number of factors including the increased atmospheric deposition of anthropogenically-derived nitrogen or changes in biogeochemical cycling in the ponds.