Grappling on the Grain Belt: Wrestling in Manitoba to 1931 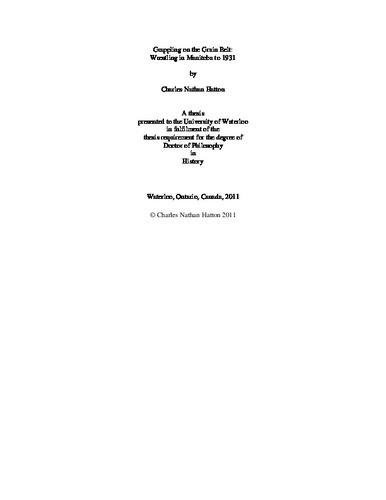 Abstract “Grappling on the Grain Belt: Wrestling in Manitoba to 1931,” explores the history of wrestling in the geographic region now demarcated as Manitoba, from the pre-Confederation period to the Great Depression, with particular emphasis on the period after 1896 when the Canadian West experienced its most remarkable demographic growth. Wrestling was a frequently controversial, often divisive, but ultimately dynamic, popular, and persistent cultural form that proved adaptable to changing social conditions. Far from being ‘merely’ a sport, residents of Manitoba found greater meaning in its practice beyond the simple act of two people struggling for physical advantage on a mat, in a ring, or on a grassy field. This study examines wrestling as a social phenomenon that echoed larger, and fluid, debates over sport’s ‘proper’ purpose, expressions of masculinity, respectable public conduct, and views concerning the position of immigrant and minority communities in a predominantly Anglo-Protestant society. It likewise explores the meanings that various groups in the province, demarcated by such factors as ethnicity and occupation, attached to wrestling in the decades before the Great Depression. In doing so, it illuminates wrestling as a complex and socially-significant cultural activity which, to date, has been virtually unexplored by Canadian historians looking at the late nineteenth and early twentieth centuries.