The Fourier algebra of a locally trivial groupoid 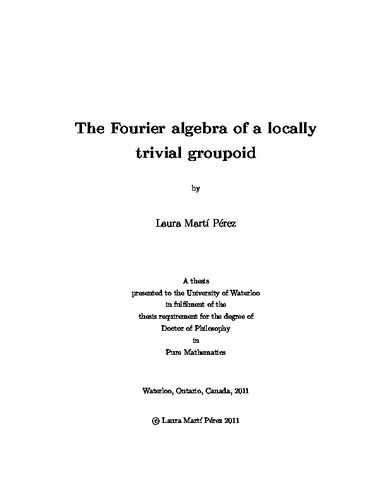 The goal of this thesis is to define and study the Fourier algebra A(G) of a locally compact groupoid G. If G is a locally compact group, its Fourier-Stieltjes algebra B(G) and its Fourier algebra A(G) were defined by Eymard in 1964. Since then, a rich theory has been developed. For the groupoid case, the algebras B(G) and A(G) have been studied by Ramsay and Walter (borelian case, 1997), Renault (measurable case, 1997) and Paterson (locally compact case, 2004). In this work, we present a new definition of A(G) in the locally compact case, specially well suited for studying locally trivial groupoids. Let G be a locally compact proper groupoid. Following the group case, in order to define A(G), we consider the closure under certain norm of the span of the left regular G-Hilbert bundle coefficients. With the norm mentioned above, the space A(G) is a commutative Banach algebra of continuous functions of G vanishing at infinity. Moreover, A(G) separates points and it is also a B(G)-bimodule. If, in addition, G is compact, then B(G) and A(G) coincide. For a locally trivial groupoid G we present an easier to handle definition of A(G) that involves "trivializing" the left regular bundle. The main result of our work is a decomposition of A(G), valid for transitive, locally trivial groupoids with a "nice" Haar system. The condition we require the Haar system to satisfy is to be compatible with the Haar measure of the isotropy group at a fixed unit u. If the groupoid is transitive, locally trivial and unimodular, such a Haar system always can be constructed. For such groupoids, our theorem states that A(G) is isomorphic to the Haagerup tensor product of the space of continuous functions on Gu vanishing at infinity, times the Fourier algebra of the isotropy group at u, times space of continuous functions on Gu vanishing at infinity. Here Gu denotes the elements of the groupoid that have range u. This decomposition provides an operator space structure for A(G) and makes this space a completely contractive Banach algebra. If the locally trivial groupoid G has more than one transitive component, that we denote Gi, since these components are also topological components, there is a correspondence between G-Hilbert bundles and families of Gi-Hilbert bundles. Thanks to this correspondence, the Fourier-Stieltjes and Fourier algebra of G can be written as sums of the algebras of the Gi components. The theory of operator spaces is the main tool used in our work. In particular, the many properties of the Haagerup tensor product are of vital importance. Our decomposition can be applied to (trivially) locally trivial groupoids of the form X times X and X times H times X, for a locally compact space X and a locally compact group H. It can also be applied to transformation group groupoids X times H arising from the action of a Lie group H on a locally compact space X and to the fundamental groupoid of a path-connected manifold.