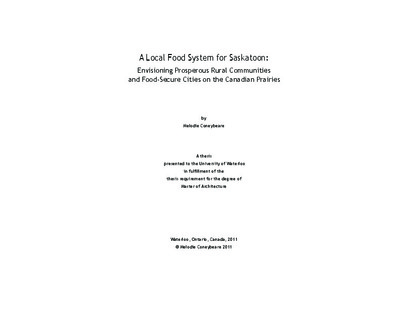 Perhaps nowhere in the world is the unsustainability of our current agricultural system more obvious than on the Canadian Prairies. Based not upon the ecological capacity of the land or the well-being of those who care for it, but upon industrial economies of scale and mass production, this fossil fuel driven system is not only causing environmental and cultural destruction which threatens the very ability of the ecosystem to continue producing food in a future of diminished fossil fuel resources, but as many recent studies have shown, the abundance of cheap grain being delivered by the system is doing more to increase hunger and human health problems around the world than to help alleviate them. Fortunately, as more and more of us realize this and many other fallacies (e.g. that industrially produced food is safe, healthy and nutritious) being told by global agribusiness today, an alternative is emerging. By reconnecting with each other directly through things like CSAs and farmers’ markets, producers and consumers around the world are making viable systems of production that are not only environmentally sound and culturally rewarding, but since they limit a community’s dependence on globally traded commodities, also contribute to the building of an overall food system which is far healthier as well as far more equitable than the global industrial one we have today. Through the development of a local food system (comprised of small-scale natural-systems-based production, rural processing and support centers, neighbourhood farmers’ markets, and community support facilities) involving one urban and one rural community - between which there is a critical reciprocal relationship - this thesis investigates the scale of system required to feed a Prairie city of 200,000, and what the implications of this would be to both the food security of urban communities, as well as the economic and social vitality of surrounding rural communities.