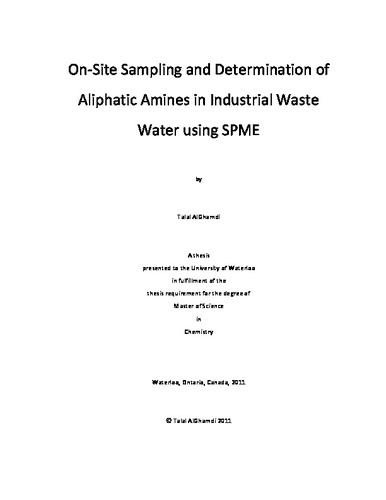 In any oil production company, one of the problems that is faced on a daily basis and which sometimes hinders the operation is corrosion. In the presence of dissolved oxygen in the water inside any vessel, tank, or pipeline, the oxygen attacks the steel to form iron oxides, and this result in corrosion of the steel. To prevent this, corrosion inhibitors are added to the oil and gas streams. These chemicals are based on aliphatic amines, which are soluble in water, to form a film to coat the steel and prevent it from the oxygen attacks. As a chemist in the laboratory, filming amines residuals should be monitored and optimized in order to make sure the system is protected against corrosion and that no excess chemical remains. This is classically done by lengthy liquid-liquid extraction of filming amines followed by colorimetric determination using spectrophotometry of the extract. SPME is an easy, rapid, and solvent free extraction technique which can be easily coupled with GC for separation and quantification, and is a good candidate to be used for this job. In this thesis, an introduction about corrosion problems and how to control and monitor them in the oil and gas industry will be shared, as well as a literature review about various methods used to determine amines in different matrices, followed by a description of the SPME procedure, including its theory, modes, fibers, and method development procedures. A flow-through system was used to simulate the process of flowing streams in pipelines during oil production and to provide unlimited sample volumes, which contributes iv to simplifying the calculation of the distribution constant between fiber and solution. Two different agitation methods were compared, which are stirring and sonication, in order to optimize the extraction time profiles of analytes. A method was developed to determine amines, using a flow-through system at the lowest detection limit possible. Different parameters were examined such as variation of pH, salt addition, and sand addition. It was found that the pH of the solution has to be adjusted in order to get better sensitivity for the desired analytes. Finally, in-fiber kinetic calibration was used to calculate the concentration of solutions at a short extraction time. This was possible by applying the dominant desorption approach using the same analytes as standards in the fiber. The experiment was successful in shortening the extraction time from 3 hours to 20 minutes, with less than 20% variation in concentrations between the actual and the calculated.