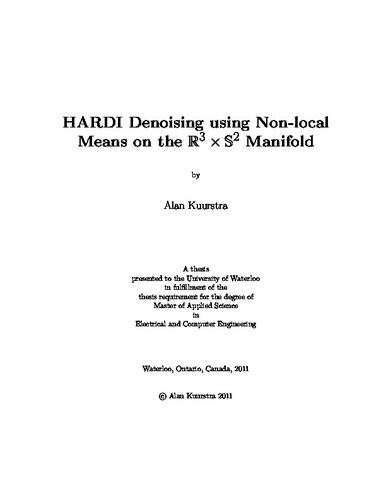 Magnetic resonance imaging (MRI) has long become one of the most powerful and accurate tools of medical diagnostic imaging. Central to the diagnostic capabilities of MRI is the notion of contrast, which is determined by the biochemical composition of examined tissue as well as by its morphology. Despite the importance of the prevalent T₁, T₂, and proton density contrast mechanisms to clinical diagnosis, none of them has demonstrated effectiveness in delineating the morphological structure of the white matter - the information which is known to be related to a wide spectrum of brain-related disorders. It is only with the recent advent of diffusion-weighted MRI that scientists have been able to perform quantitative measurements of the diffusivity of white matter, making possible the structural delineation of neural fibre tracts in the human brain. One diffusion imaging technique in particular, namely high angular resolution diffusion imaging (HARDI), has inspired a substantial number of processing methods capable of obtaining the orientational information of multiple fibres within a single voxel while boasting minimal acquisition requirements. HARDI characterization of fibre morphology can be enhanced by increasing spatial and angular resolutions. However, doing so drastically reduces the signal-to-noise ratio. Since pronounced measurement noise tends to obscure and distort diagnostically relevant details of diffusion-weighted MR signals, increasing spatial or angular resolution necessitates application of the efficient and reliable tools of image denoising. The aim of this work is to develop an effective framework for the filtering of HARDI measurement noise which takes into account both the manifold to which the HARDI signal belongs and the statistical nature of MRI noise. These goals are accomplished using an approach rooted in non-local means (NLM) weighted averaging. The average includes samples, and therefore dependencies, from the entire manifold and the result of the average is used to deduce an estimate of the original signal value in accordance with MRI statistics. NLM averaging weights are determined adaptively based on a neighbourhood similarity measure. The novel neighbourhood comparison proposed in this thesis is one of spherical neighbourhoods, which assigns large weights to samples with similar local orientational diffusion characteristics. Moreover, the weights are designed to be invariant to both spatial rotations as well as to the particular sampling scheme in use. This thesis provides a detailed description of the proposed filtering procedure as well as experimental results with synthetic and real-life data. It is demonstrated that the proposed filter has substantially better denoising capabilities as compared to a number of alternative methods.