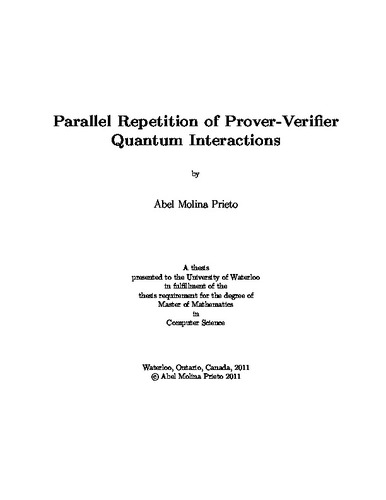 In this thesis, we answer several questions about the behaviour of prover-verifier interactions under parallel repetition when quantum information is allowed, and the verifier acts independently in them. We first consider the case in which a value is associated with each of the possible outcomes of an interaction. We prove that it is not possible for the prover to improve on the optimum average value per repetition by repeating the protocol multiple times in parallel. We look then at games in which the outcomes are classified into two types, winning outcomes and losing outcomes. We ask what is the optimal probability for the prover of winning at least k times out of n parallel repetitions, given that the optimal probability of winning when only one repetition is considered is p. A reasonable conjecture for the answer would be the answer when it is optimal for the prover to act independently. This is known to be the correct answer when k=n. We will show how this cannot be extended to the general case, presenting an example of an interaction with k=1,n=2 in which p is approximately 0.85, but it is possible to always win at least once. We will then give some upper bounds on the optimal probability for the prover of winning k times out of n parallel repetitions. These bounds are expressed as a function of p. Finally, we connect our results to the study of error reduction for quantum interactive proofs using parallel repetition.