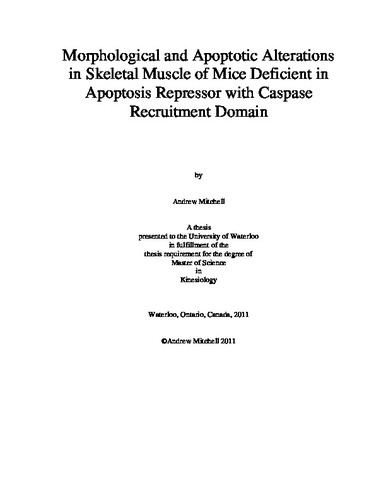 Altered apoptotic signaling in skeletal muscle has been observed in a number of disease states associated with skeletal muscle atrophy. Therefore, understanding the mechanisms that lead to increased skeletal muscle apoptosis may help to prevent the atrophy associated with various diseases. Apoptosis repressor with caspase recruitment domain (ARC) is a potent anti-apoptotic protein that is able to inhibit apoptosis mediated by both the death-receptor and mitochondrial pathways. In addition, ARC has a unique distribution pattern and is highly expressed in terminally differentiated tissue such as skeletal muscle. To characterize the role of ARC in skeletal muscle morphology and apoptosis, soleus and plantaris muscles of 18 week-old ARC-deficient mice were excised and compared to those of age-matched wild-type littermates. While no differences were seen in muscle weights between genotypes, in the ARC KO animals, the cross-sectional area (CSA) of the soleus was smaller, while the CSA of the plantaris was larger. With respect to fiber type distribution, both muscles demonstrated a shift towards a faster myosin heavy chain expression pattern. For example, soleus muscles of ARC KO animals had significantly less type I fibers and more IIa fibers, while plantaris muscles had significantly less type IIa fibers, and more IIb fibers. In ARC KO animals, type I and IIa fibers were significantly smaller in the soleus, while type IIb fibers were larger in the plantaris. DNA fragmentation (a hallmark of apoptosis) was increased in the soleus, but not plantaris muscles of ARC KO animals. Surprisingly, activity of the proteolytic enzymes caspase-2, -3, -8, and -9, as well as calpains, was not different in either soleus or plantaris muscles. To determine whether a lack of ARC protein affects apoptotic signaling in skeletal muscle, the total expression of pro- and anti-apoptotic proteins were also assessed. In the soleus, no changes were observed in whole tissue AIF, cytochrome c, EndoG, and Smac. In the plantaris, there was no change in total muscle AIF; however, there were trends towards decreased cytochrome c, and increased Smac, as well as a significant decrease in EndoG ARC KO animals. No changes were observed in Bcl-2 and XIAP in the soleus; however, there were significant reductions in FLIP(s) and HSP70 content. In the plantaris, no changes were observed in anti-apoptotic protein content. Subcellular fractionation of red quadriceps for ARC KO mice revealed an increased Bax:Bcl-2 ratio in the isolated mitochondrial fractions. Furthermore, in cytosolic fractions of red quadriceps, AIF protein content was significantly increased in ARC KO animals. Conversely, no changes in apoptotic-related protein content were observed in any fractions from white quadriceps between groups. In agreement with these findings, isolated mitochondria from ARC-deficient animals were more susceptible to calcium induced swelling, as well as membrane potential loss compared to controls. Taken together, these results suggest that in slow-oxidative skeletal muscle of ARC-deficient mice there is increased apoptosis due to caspase-independent, mitochondrial-mediated apoptotic signaling. Furthermore, this study is the first to show ARC plays an important role in skeletal muscle morphology, as ARC KO mice have an altered skeletal muscle phenotype and morphology.