Characterization of the association of Dbf4 and Cdc7 with Mcm2-7 and chromatin in Saccharomyces cerevisiae. 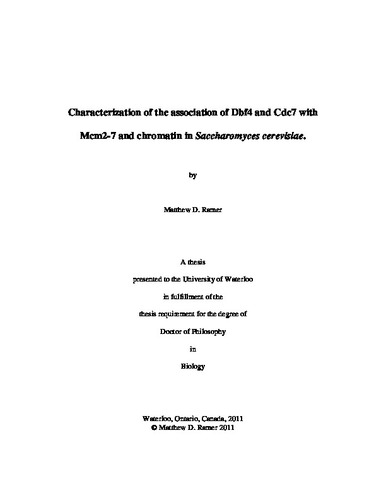 Initiation of DNA replication requires the action of the Dbf4/Cdc7 kinase complex (DDK) which is also a phosphorylation target of Rad53 kinase in the S-phase checkpoint. DDK is thought to trigger DNA replication by phosphorylating members of the Mcm2-7 complex present at origins of replication. While DDK phosphorylation sites have been identified on Mcm2-7, the contributions made by Dbf4 and Cdc7 to the targeting of the complex have not been established. DDK has also been implicated in the S-phase checkpoint response since it is removed from chromatin in a Rad53-dependent manner. The interaction of Dbf4 and Cdc7 with each of the Mcm2-7 subunits was assessed and showed an interaction between Dbf4 and Mcm2 and Mcm6, while interactions between Cdc7 and Mcm4 and Mcm5 were observed. Mutations in Mcm2 and Mcm4 that disrupt the interactions with Dbf4 or Cdc7 showed modest growth impairment and compromised DNA replication, while simultaneous abrogation of both interactions resulted in lethality. Strains overexpressing Mcm2 or Mcm4 were sensitive to genotoxic agents, while overexpression of Mcm2 in a Mcm4Δ175-333 strain background resulted in a severe growth impairment as well as sensitivity to genotoxic stress. ChIP analysis revealed the possibility of Dbf4/Cdc7 localization to origin flanking regions through most of S-phase, which may redistribute to origins at the time of firing. Fluorescence microscopy of Mcm2 and Dbf4 in S-phase seem to show a punctate pattern of staining, consistent with these factors’ localization to ‘replication factories.’ By using a Dbf4ΔN mutant, the N-motif was shown to be required for the Rad53-mediated removal of Dbf4 from chromatin under checkpoint conditions. Initial optimization of a DNA combing protocol was also performed, which along with Dbf4ΔN mutant and the fluorescently-epitope tagged strains, will be useful tools for evaluating a role for DDK in the S-phase checkpoint response. Altered levels of DNA replication factors have been implicated in many human cancers. The data presented in this study provide novel insight into the normal process of the initiation of DNA replication which can be applied to research involving higher eukaryotes, including humans, and can serve as a benchmark for comparison with the cancer phenotype.

Matthew Ramer (2012). Characterization of the association of Dbf4 and Cdc7 with Mcm2-7 and chromatin in Saccharomyces cerevisiae.. UWSpace. http://hdl.handle.net/10012/6429