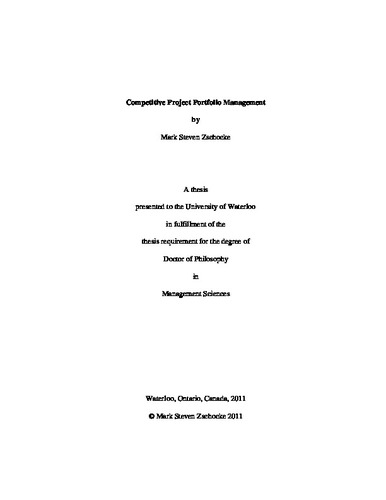 Although project portfolio management (PPM) has been an active research area over the past 50 years, budget allocation models that consider competition are sparse. Firms faced with the project portfolio management problem must not only consider their current projections for the returns from their projects’ target markets, but must also anticipate that these returns can depend significantly on the investment decisions made by their competitors. In this thesis, we develop four Competitive PPM (CPPM) models wherein firms allocate resources between multiple projects and project returns are influenced by the actions taken by competitors. In the first two CPPM problems, we assume all-or-nothing project investment decisions where firms fully commit to either a project targeting a mature or an emerging market and the investment amount is fixed (first model) or a decision variable (second model). In the final two CPPM problems, firms have a fixed budget which they allocate in a continuous manner between two markets (third model) or multiple markets (fourth model). The returns each firm obtains from investments into these markets are assumed to follow an s-shaped curve (first model), the Inada (1963) conditions (third model), or are determined based on linear demand functions (second and fourth model). In the first model, two competing firms consider investing into two separate projects targeting a mature and an emerging market. We assume that firms have symmetric investment opportunities for each market and each firm simultaneously decides whether to invest in the mature or the emerging market. The returns from these markets are assumed to follow an s-shaped curve and depend on both firms’ investment decision. We characterize the variety of interactions that may emerge in symmetric environments (e.g., Prisoner’s Dilemma or Game of Chicken). For each game, we outline the CPPM strategy that can offer higher returns by exploiting first-mover advantages, cooperation opportunities and aggressive choices. We also discuss the market conditions that lead to these games. In the second model, a similar CPPM setting is considered where two symmetric firms face two target markets. However, we assume that demand for the emerging market is uncertain and may expand through firms’ market entry (positive diffusion effects), while demand for the mature market is known with certainty and cannot expand. Firms decide when to invest, in which market to invest, and how much to invest into this market. Our analysis reveals that the existence of multiple investment opportunities may induce firms to delay their investment even in the absence of demand uncertainty, and that high diffusion effects coupled with low demand uncertainty can drive firms to invest early even if both firms could increase returns by delaying their investment. We then study the asymmetric case where firms differ with respect to their costs and diffusion effects and show some counter-intuitive results. In the third CPPM problem, we consider continuous budget allocations and prove that while a monopoly firm bases its budget allocation decision solely on the marginal returns of the two markets, duopoly firms also account for their average returns from the two markets. This drives duopoly firms, in particular the firm with the smaller budget, to invest more heavily into the mature market. We show that as a firm’s budget increases, the share of its budget that is invested into the mature market decreases while its competitor’s investment into the mature market increases. This chapter also explores how changes to the market parameters and market uncertainty affect the resource allocation decision of firms under competition. Considering the special case of identical budgets, we prove that as the number of competing firms increases (with a fixed total budget), firms allocate an even greater share of their budget into the mature market. The fourth model considers a general case where a number of budget-constrained firms engage in production decisions for multiple markets under competition. Each firm decides how much to produce for each market, subject to its budget constraint. We prove that firms produce greater quantities for markets with higher than average base demand and that these quantities are increasing in the number of competitors (assuming identical production capacities). With asymmetric production capacities, we numerically illustrate how firms with large production capacities may, instead, increase production into lower than average base demand markets. Furthermore, we characterize the increase in return firms can expect from budget increases and conjecture that if some markets are not served by all firms, the remaining firms reduce their production into those markets where some firms are not producing.