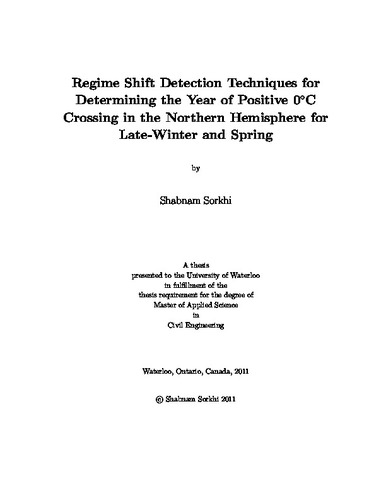 The temperature of 0°C, the phase change point of water-ice, is among the most influential factors on the hydrology of the temperate regions that experience winter. Many cryospheric processes, such as snow and ice melt, avalanches, freshwater ice breakup, and ice jam floods, are triggered by the arrival of the above-0°C air temperatures. Moreover, such 0°C based changes can have significant cascading impacts on other parts of the physical environment as well as related socio-economic activities. This research adopts an extensive analytical approach to examine the changes in the sign of mean JFM (January-February-March) and MAM (March-April-May) air temperatures, in the 0.5° × 0.5° land grid cells of the Northern Hemisphere (20.25°N-89.75°N), during the period 1901-2009. The goal is to identify grid cells in which JFM or MAM temperatures used to be primarily below freezing, however, changed sign permanently some time during 1901-2009 due to an advancement in the arrival timing of the annual above-0°C temperature. Considering that air temperature fluctuates and can cross 0°C several times during the entire period of study, four different modelling techniques are employed to detect the shift points in the trend function as well as mean level of the time series and to determine the year when the model rises above 0°C (y₀) in a given location. Model-specific criteria are set to determine y₀ in cases of multiple positive 0°C crossings. The techniques applied include i) trend shift detection techniques: Model 2 and Model 3 (Perron and Yabu, 2009b; Kim and Perron, 2009), ii) Multivariate Adaptive Regression Splines (Friedman, 1991), and iii) the R method (Rodionov, 2004,2006). This thesis provides a thorough discussion of these techniques and reviews their strengths and weaknesses relative to the research goals. In addition to y₀, the time of the onset of warming that causes a time series to permanently rise above 0°C (y_w) is identified. The applied methods divide the entire domain of the time series into sub-regions in which the data are approximated by polynomials of degree zero or one. The segment which encompasses y₀ is termed the 'segment of interest' (S_interest). The combination of S_interest and the segment(s) with positive slope that immediately follows S_interest forms a section referred to as the 'section of total warming' (S_W_total ). The non-parametric Mann-Kendall test, following the modified trend-free pre-whitening approach (Burn et al., 2004), is conducted to examine if the warming during S_interest, which causes the temperature to turn positive, is significant. The same test is applied to S_W_total to determine if the total warming subsequent to y_w is significant. Only the locations with significant warming during S_interest and S_W_total are selected. A bootstrap analysis (Cunderlik and Burn, 2002), conducted to determine the field significance of the results, indicates that local trends are also globally significant.  A thorough comparative evaluation of all the above-mentioned techniques determines that Model 2 is the technique that best meets the analysis goals. Analytical results indicate that during JFM, y₀ most commonly takes place in the following zones (referred to as 'transition area'). It should be noted that only the grid cells with significant warming during S_interest and S_W_total are considered: i) North America, western U.S; ii) Europe, highest density in central Europe; iii) southwestern and central Asia, a small region consisting of some parts of Uzbekistan, Kazakhstan, and Iran; iv) central-eastern Asia, a small area in western China most of which lies in the Taklamakan Desert; v) easternmost Asia, some grid cells from east-central China, South Korea, and Japan. During MAM, over North America, the transition area of Model 2 is principally located in Canada and extends from northeastern British Columbia to the Atlantic regions. In Eurasia, northern Europe, European Russia, southern Russia, northern Mongolia, and northeastern China form the great portion of the transition area. It should be noted that except for a few high-elevation regions located in lower latitudes, the grid cells with y₀ taking place during MAM are located north of those with y₀ occurring during JFM. Results also indicate that y₀ of the majority of locations occurs during the 1960-2008 interval. During MAM, the transition area of Model 2 in east-central Canada and Eurasia exhibits a clear pattern of increase in y₀ values with latitude. This characteristic is also observed in some regions during JFM. The y_w values are most commonly distributed over the period 1901-1980 with a peak during 1960-1980. The rate of warming over S_interest and S_W_total generated by Model 2 is 0.01-0.1(°C/year). The spatial and temporal variability in the results is believed to be related to variations in climate, elevation effects, and/or large-scale atmosphere and ocean circulations, all of which require further evaluation for proper attribution of effects.